In case you missed it, I posted an entry about Coltrane yesterday.

Thank you all for your kind words, here and on Facebook and Twitter. Even though Coltrane hadn’t been spending much time inside with us since the weather turned warm (he was briefly banned from the house after we realized he was spraying all over the place every time we let him in, but he looked so sad at not being allowed inside, that we relented because we are suckers. The boy had a bladder the size of Texas.), his absence is definitely felt. He was always so very happy to see us in the afternoon, when it was time to feed the pigs, and he’d follow us around and talk to us until we picked him up or at least petted him.

This is my favorite picture of him, from last September, though I didn’t post it yesterday because I was afraid he looked a little, um, not completely alive in it. (He was, though, he was just delirious with joy. He LOVED being held.) 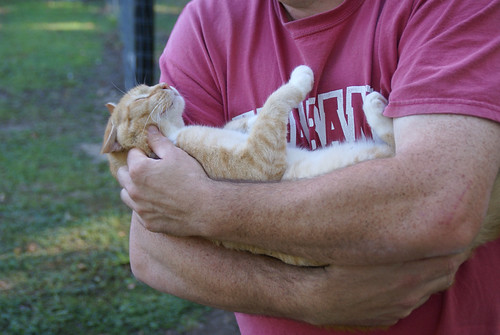 About those baby robins in the nest in the front yard. I told Fred what Doodle Bean said – that baby birds get all the water they need from the worms and bugs their parents feed them – so he stopped giving them water. However, it took a couple of days before he accepted that they were probably getting enough worms and bugs from their parents to keep them alive, so he fed them some more worms.

This time, I followed him with the camera. 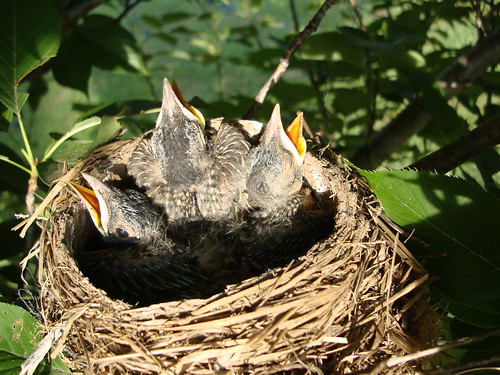 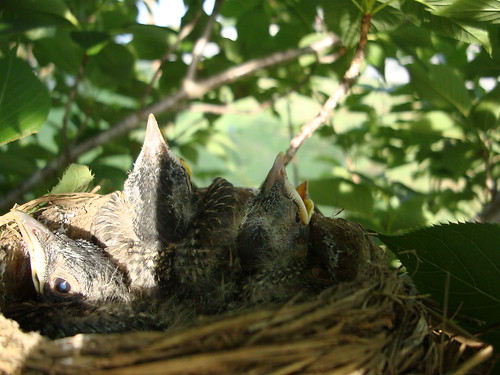 It was hard to make a video, because the nest is higher than I am, so I wasn’t quite sure if I was getting anything with the camera. I swear, I always thought that mama birds would eat the worms/ bugs and then vomit them back up into their babies’ mouths (or something gross like that) and I even told Fred that if he truly loved those birds he’d do the same (hee), but these babies sucked down the worms like they’d been doing it all their lives.

(I did make Fred stop feeding them. They seem perfectly healthy and active, and it’s better to let their REAL parents take care of them.) 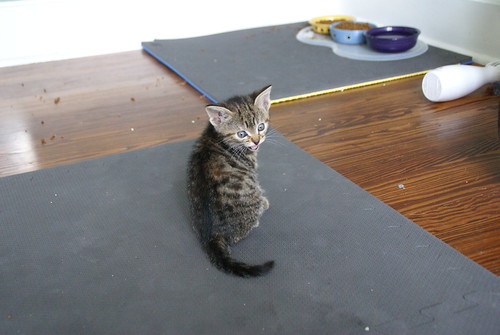 “OH MY STARS! Doesn’t ANYONE ever vacuum this room? Look at this mess!” 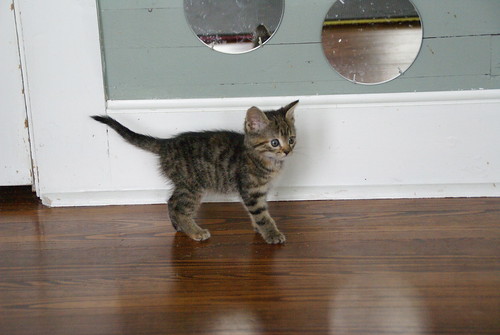 “::sigh:: And the MIRRORS!” Look, I clean them all the time! If these kittens would just stop sticking their noses on them! 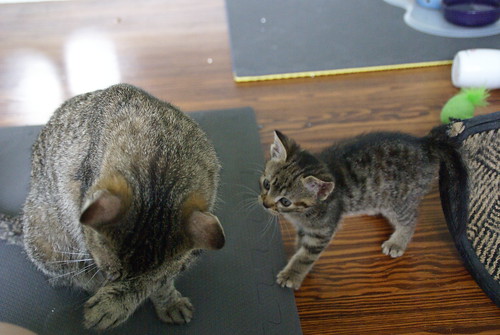 Clove takes notes on this “cleaning” business in case there are any tips she can pass on to me. 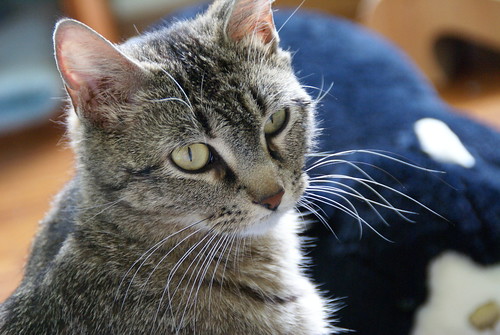 Maggie wonders how she ended up in this room again, this time with three babies instead of six. Why, it’s like a vacation! 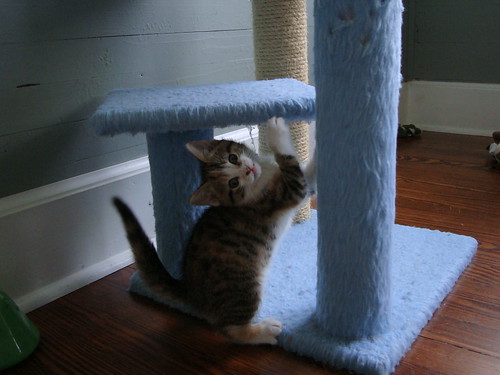 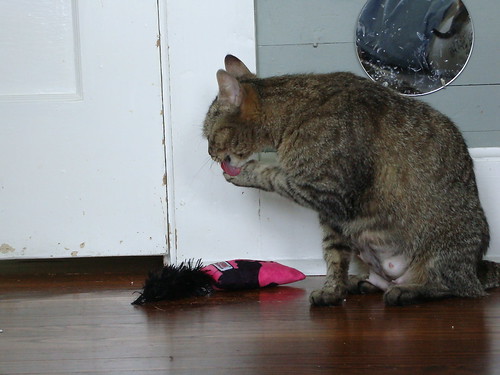 Maggie continues to clean whilst waiting to be let out. 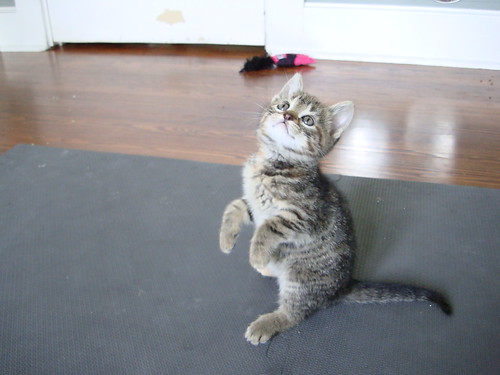 Hmm. I wonder if I could train her to sit up like this for a snack? 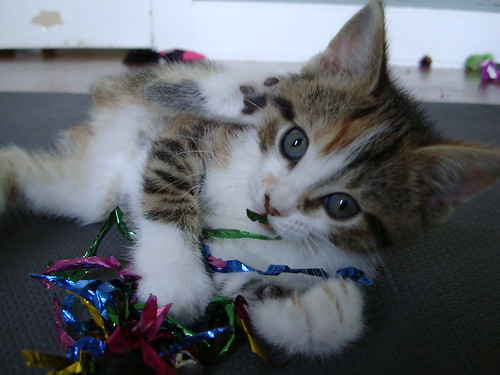 Cilantro and the teaser. 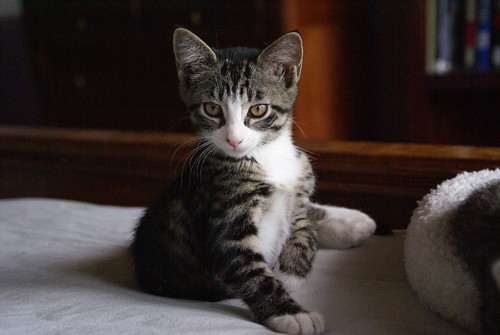 Ciara in the sun. She knows she’s a pretty girl. 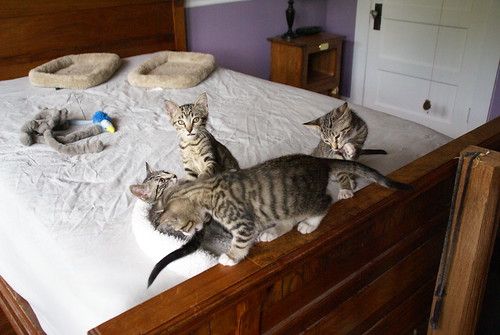 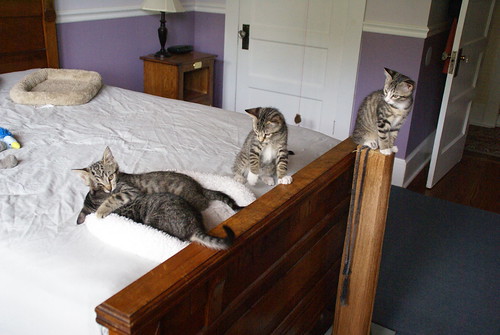 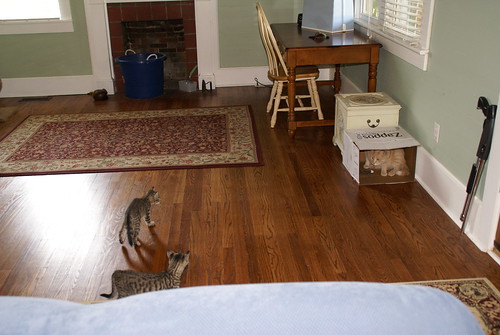 Newt’s keeping an eye on the kittens from the Newt Cave. The kittens aren’t sure whether it’s safe to approach or not. 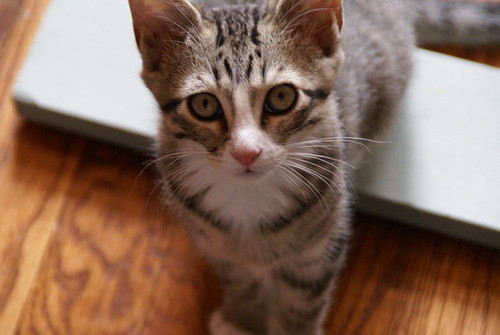 Finnegan wonders if perhaps it might be time for the snuggle? 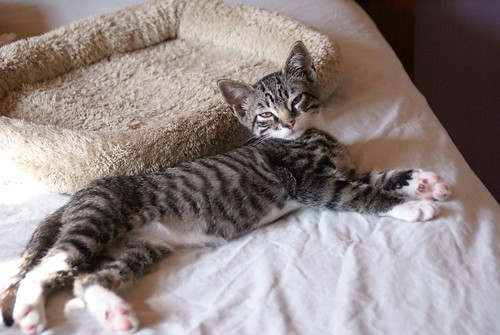 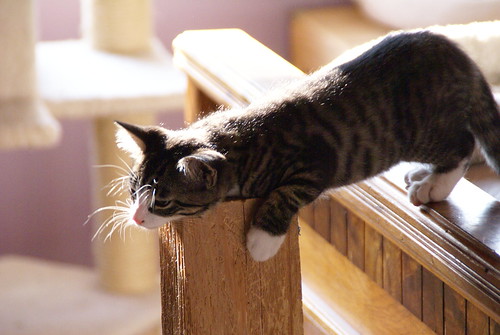 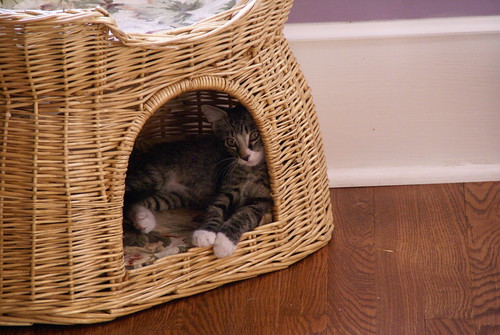 Macushla gets a little time to himself.

The McMaos are still nursing – TRYING to nurse, I should say – and Maggie puts up with it for a bit, then decides they’ve had enough. Yesterday, Maggie was following me around in hopes that I might be overwhelmed with the desire to give her food, and she was in turn being followed around by Finnegan and Fergus Simon, and every time she stopped, they tried to nurse with her standing there. It was too funny.

One day last week she let them nurse briefly, and I happened to have the camera at hand. So I made a video, of course! (Please note: all that stuff was on the floor because Maggie knocked it down and I hadn’t had a chance to pick it up.) 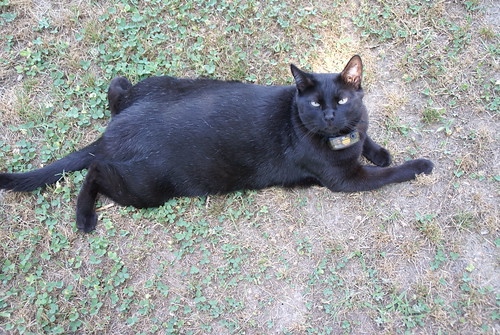 Tommy in the back yard. I love it when they lay like this!