So last Monday I brought the Rescuees home, and they were all perfectly fine, healthy, running around like their tails were on fire. Especially Sheila, who won me over with her wild ways at the vet. I weighed them all Monday night to see where they were.

As the week wore on, Sheila got quieter and quieter and stopped eating, and it got to the point where every time I walked into the room, I was carrying something to try to tempt her to eat. She seemed to rally Thursday – I got her to eat – but when I walked into the room a little later there was a large puddle of vomit. By Friday, she’d lost 4 ounces from a beginning weight of 1 pound, 6 ounces. She was seeming to rally again, she ate Friday morning, but then vomited again. She’d go over and sniff the bowl of food, but then walk away and sit there, hunched over, looking miserable. She clearly wanted to eat, but was nauseated by the smell of the food. We had an appointment for Spanky Friday afternoon, so I called the vet’s office to make sure it was okay to bring her with us. It was, so we did.

The vet looked her over, they did a fecal, and the vet offered up a couple of suggestions as far as what could be going on with her. She gave us a few things to give Sheila, and we were on our way home.

(Spanky, by the way, at the age of almost 14, has ACNE on his chin. He’s never had that issue before, but in his senior years he’s all acne’d up like a, well, a 14 year old boy, now that I think about it. He’ll be fine.)

So poor Sheila, all weekend long every time we went into the kitten room, we were putting medicine or PediaSorb into her mouth, and she was getting pretty tired of it, thank you. But she seemed to be doing better on Saturday, and last night she was back up to 1 pound, 4 1/2 ounces. The best thing, what really made us feel better, is that she was playing. She hadn’t really done any serious playing since Tuesday night, but yesterday she was chasing the boys around and showing them who the boss is.

So she’s doing well – they all are – eating well, and now every time I walk into the room, they all howl at me because they got accustomed to my constantly bringing tasty food to tempt Sheila to eat.

Garrity, on the cat tree, where he’s safe from Sheila. Check out his gorgeous eyes – here’s a closeup: 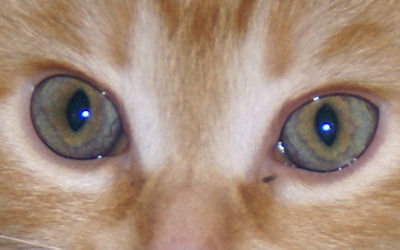 How neat is it that the gold is spreading outward from his pupils like that? SO neat! 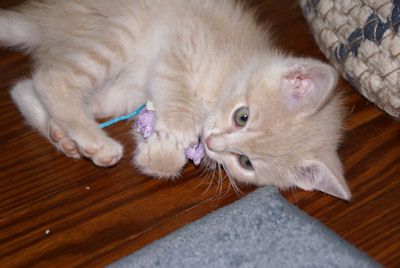 Gavin kicks some toy mouse butt. He’s got the really cool eyes, too: 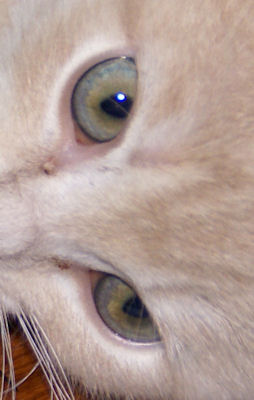 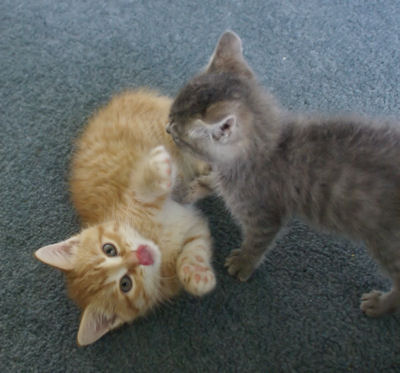 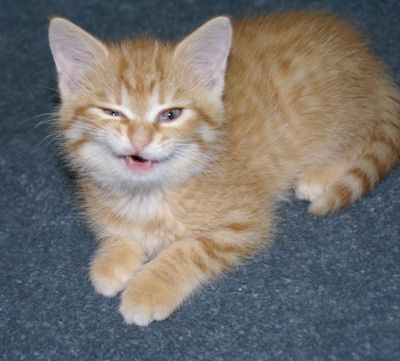 “I was just playin’ dead so she’d go away. When she’s not looking, I’m totally going to jump on her and bite her neck!” 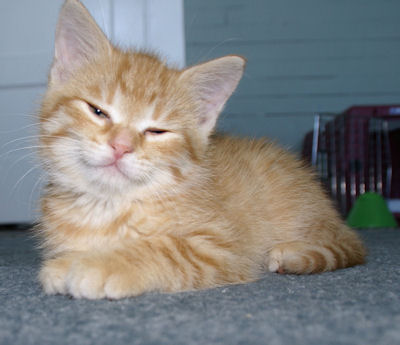 The Bookworms are also doing well. They’re now in the house 24 hours a day instead of being locked up in the guest bedroom at night. I had planned to start letting them stay out all the time a few weeks ago, but ended up deciding to keep putting them in the guest bedroom as long as they didn’t fight it too hard. Friday, they fought it, and I decided we’d just leave them out and see how it went.

It’s going okay. At various times through the night, I wake up and have all the kittens in bed with me. There’s been the occasional Bookworm-Elwood/ Jake spat, and they LOVE to race through the house like a herd of elephants the instant all the lights are off, but I’ve been sleeping okay, so I’m not going to complain. Rhyme and Bolitar take turns sleeping curled up right next to me. They both purr constantly, and waking up to a sweet purring kitten curled up next to you is always a good thing. 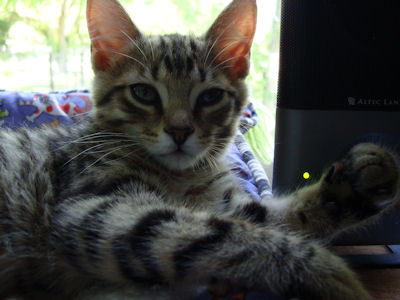 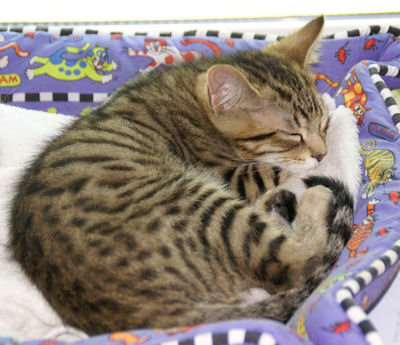 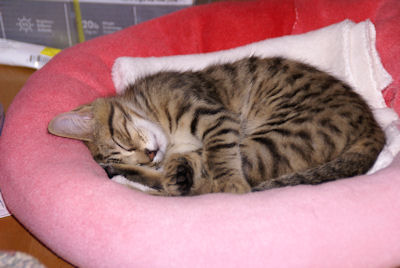 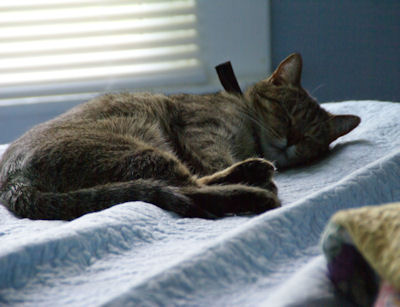 Kara in her favorite sleeping place.