I think I’ve mentioned in the past that when we started fostering kittens, it was my deep-down hope that Miz Poo would get in touch with her maternal instincts (hey, she’s female, right? She MUST have maternal instincts, right? ALL WIMMINS WANT BABIES, RIGHT?!), and she’d act as a mother to the little fosters. Like, protect them from the other cats, and groom them, and keep a motherly eye on them, play with them, that sort of thing.

Alas, it was not to be. By the time we started fostering, Miz Poo was five or six years old, and set in her ways. If a kitten came into her personal space, Miz Poo would hiss and smack. And if a kitten tried to rub up on her, you’d think given Miz Poo’s reaction that they’d committed the most appalling of sins.

So time went by and Miz Poo put the smack down on any kitten who came close, though she did relax her standards just a tad, to the point where if a kitten walked up and sniffed at her, she’d allow them to touch noses with her for a few seconds before she commenced with the hissing and the smacking.

So we got the point: Miz Poo is not a great fan of kittens. Just doesn’t care for them, whether they’re cute or ugly*, friendly or feral, playful or sleepy. NO kittens were allowed to invade Miz Poo’s personal bubble, and woe betide any kitten who didn’t observe that rule.

And then yesterday, I walked into the computer room and saw such a strange sight that all I could do at first was stop and stare. 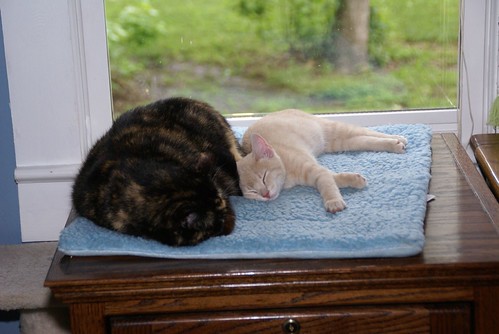 How… how did this happen? I stepped closer and examined the situation from all angles. I would have guessed that Miz Poo was sleeping on the blanket and while she was out cold, the kitten had climbed up next to her and fallen asleep. Except… 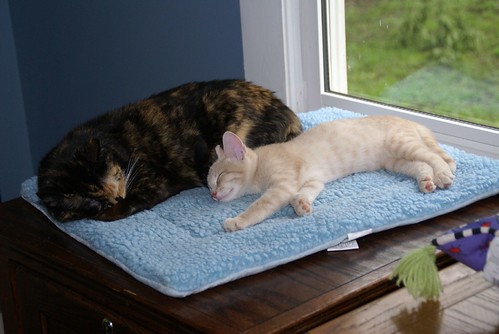 Except that Miz Poo is clearly laying to one side of the blanket. And if I know anything about cats, it’s that when they find a blanket or a cat bed, they don’t lay to one side of the cat bed or blanket. No, they stretch out diagonally across the area so as to lay claim to the blanket or cat bed, so that no cats who wander by will think “Oh, there’s space for me right there!”

The only conclusion I could draw was that the kitten was asleep on the blanket and Miz Poo was so desperate for a cozy place to lay her weary head that she relaxed her requirements just this once. 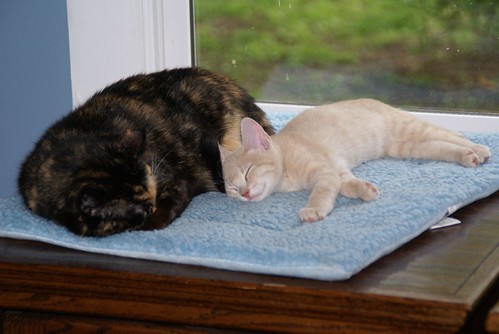 And the two of them snoozed together, occasionally touching, all afternoon long before the kitten got hungry and wandered off in search of sustenance.

An aberration, clearly. A one-time thing, this snuggling of Poo and kitten. Once does not make a pattern, as we’re always told. The world will not crack open because just this one time Miz Poo did not stick to her this-is-my-space-do-not-enter requirements.

Once is not a pattern.

But how about twice? 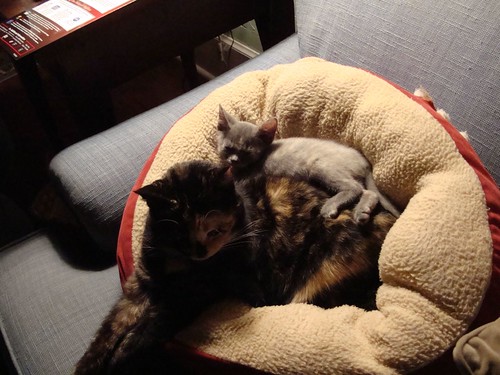 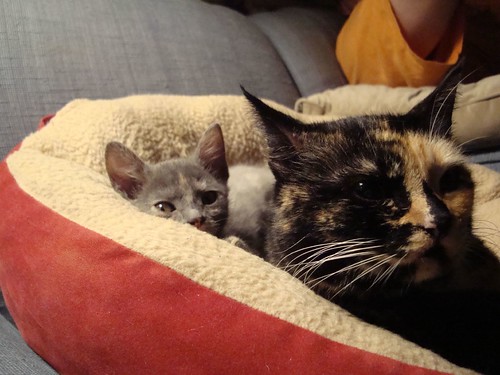 First the wily runt climbs into the cat bed with Miz Poo, who just SITS THERE and does nothing. No smacking. No hissing. No temper tantrums. No, she just SITS there.

And when the wily snugglicious runt has determined that no smackdown is coming her way, what does she do? 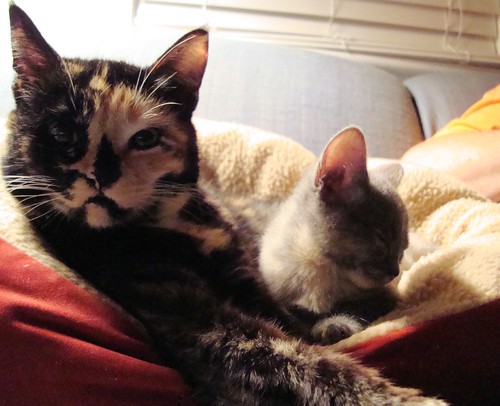 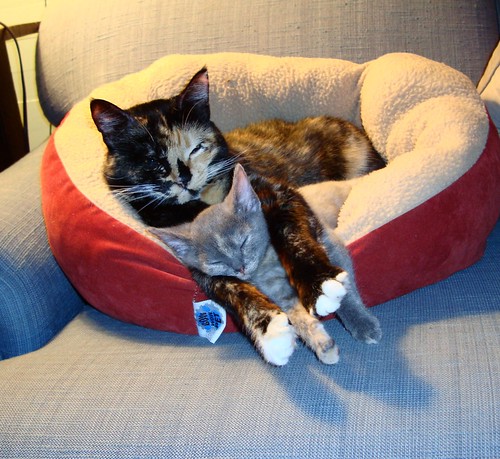 She wiggles around so that she can get some real snuggle action going on.

AND MIZ POO JUST SITS THERE AND TAKES IT.

Frankly, I don’t understand what the heck is going on.

*Ha ha! Trick sentence! No such thing as an ugly kitten!

Say good-bye to Ezra and Elijah, who are just about to go back to the pet store – hopefully to be adopted very quickly!

(I imagine the trip to the pet store with Ezra howling the entire time will be pleasant.) 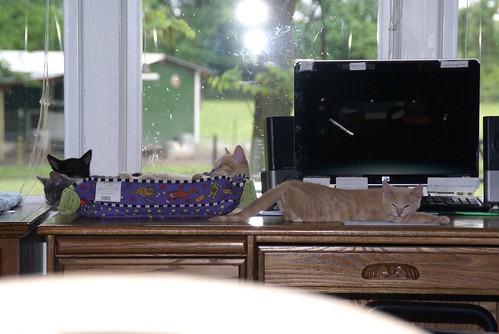 No, really, brats. Make yourselves at home! 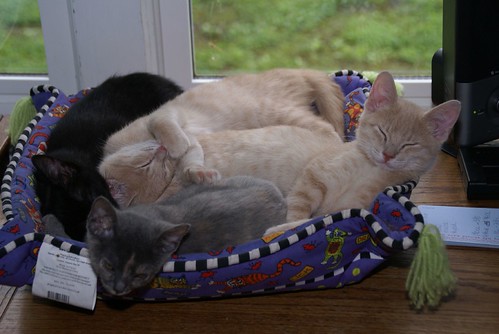 I think the cat bed is filled beyond capacity. She’s gonna blow! 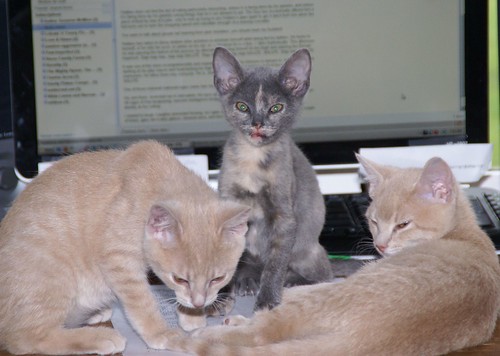 The look on Beulah’s face is cracking me up. I think I got her right after a yawn. 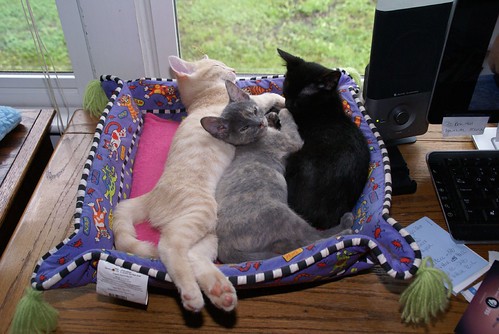 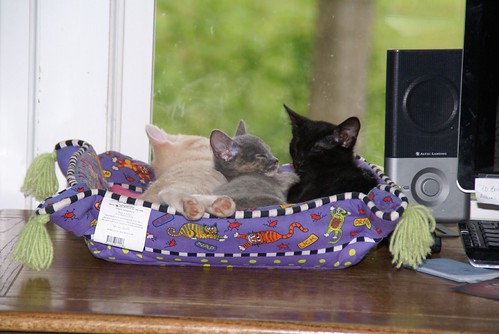 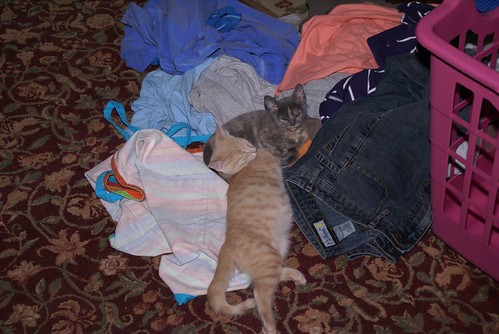 Helping with the laundry. 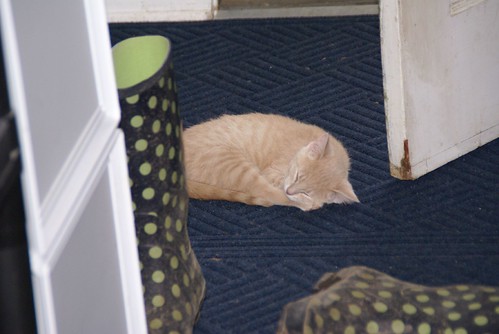 Of course, with 300 cat beds in the house, why not curl up on the dirty doormat by the back door?