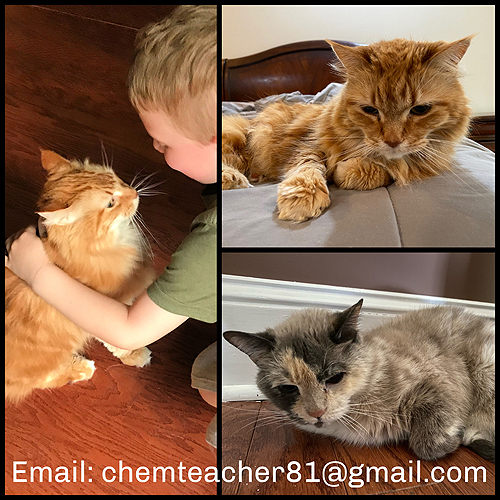 From Rachael: I am a high school teacher and a friend of mine has a daughter that’s moving to England and cannot take her two elderly cats with her. She’s had them both since kittens and they’re approximately 15 years old. I’d take them but I have a senior cat that doesn’t like other cats. These two cats were raised with dogs. She’s heartbroken she can’t take them with her so she’s trying to find a home for them together to live out the rest of their years. They’re with her in Valdosta, GA now and will be with her mother (my teacher friend) in Jackson, GA shortly for two weeks (she can’t keep them permanently because her husband has severe allergies). The owner is even willing to pay for food/litter delivery to whomever can take them together. Heck, I can even deliver to the Birmingham area if needed (2 hour drive from me). The orange boy is Harley and the dilute tortie girl is Sadie.

They are located in Valdosta, GA currently and will be in Jackson, GA for 2 weeks. If you are interested in adopting these sweet kitties – TRANSPORTATION CAN BE ARRANGED – please email Rachael at chemteacher81 (at) gmail.com

Andrea is having a raffle for this awesome fancy sofa! 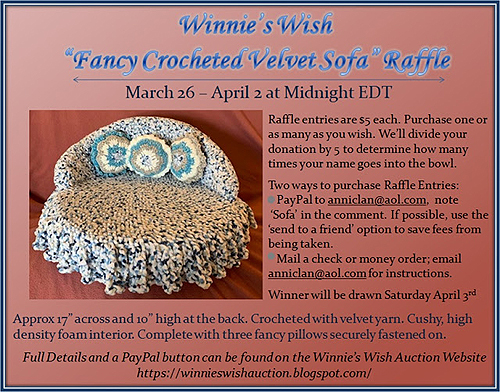 Andrea is the very same person who created the Fancy Sofa you see here at Love & Hisses from time to time. I can attest she does amazing work that holds up well over time. She has auctions to benefit Winnie’s Wish cat rescue and shelter, and now she’s having a raffle! Click on the picture to go to the auction page, or click right here! Go enter now – and good luck!

And speaking of raffles… The Forgotten Felines raffle for this amazing quilt ends TOMORROW at 7 pm Central Time. 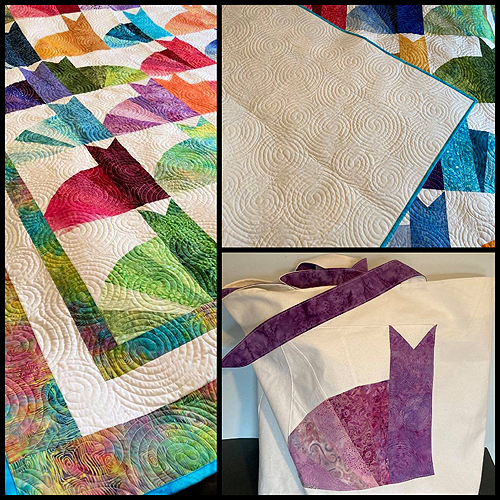 Forgotten Felines of Huntsville supporter Mary Long made this gorgeous “Phat Cat” quilt. It measures 76″ x 90″ and weighs about 5 pounds. AND it comes with a coordinating tote bag!

It costs $5 per entry into the raffle (and you can enter as many times as you’d like!) You DO NOT have to be local to enter – if you’re not here in the Huntsville, Alabama area, we will ship the quilt to you.

Check out the auction page for more pictures and info or just send $5 per entry to forgottenfelineshsv (at) yahoo.com via the “sending to friends” option (to avoid fees) and note “QUILT.” You can enter RIGHT NOW through Saturday at 7 PM (Central Time.) Saturday evening (7:15ish) we’ll draw a winner live here at Love & Hisses Central (I don’t know if we’ll actually get a kitten to draw the name, but there WILL be kittens in the live drawing video).

All proceeds benefit the Forgotten Felines of Huntsville Sanctuary Cats Fund for cats in long-term care.

Apropos of nothing, every time I come to your site (which is everyday) I sing “Love and Hisses, Love and Hisses go together like Purrs and Kisses” to the tune of “Love and Marriage” as sung by Frank Sinatra, LOL!

Is it my imagination or did you at one point post photos of Canasta’s first litter? I looked, but couldn’t find it. Maybe I imagined it. I was wondering how the markings compared. Thanks.

Apparently I posted them on Facebook and they never made it over to the blog for some reason (I must’ve been too busy staring at Canasta’s belly.) So here are the pictures Breanna sent me, together in a collage (and you can click on the picture to see the larger version over at Flickr! Or click on that Facebook link above to go directly to the Facebook post.) 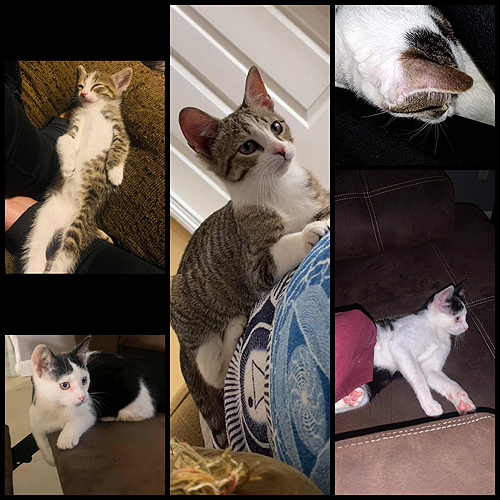 Does anyone follow Kitten Lady on Instagram? She takes care of very small baby animals. She somewhat accidentally got a litter of neonate puppies to foster (Someone at first thought they were kittens!!). She loves them and is taking good care of them, of course, but had a funny video the other day where she was holding one up. She said at this young age they’re just about like kittens and need the same things, but she’s been puzzled about whether they’re happy or not because they don’t purr! I’m sure they are happy. They’re cute too, though not as cute as kittens imho!

I follow her! I didn’t see that video (I don’t always keep up), but I saw the series of puppies yawning as they were being stimulated to potty. So funny!

Her Mamadoo and the Babydoos jingle got stuck in my head and pops up again every now and then. (I have no idea if this embedded post will show up for everyone, but you can see the video/song over at Facebook, too.)

Canasta is featured in LoveMeow today!! So get prepared for lots of new followers! Nice to see the little kittens moving about and exploring.

And the Love Meow post is featured in Cutetropolis!

I love Love Meow! I did see an influx of followers after that post went live.

I don’t know if y’all have noticed, but it’s been NUTS on the Love & Hisses Facebook page. I got more than 2,000 new followers in the space of about a day because someone shared this video of Canasta and the kittens (or here at YouTube), and it really took off.

It continues to get a few hundred shares a day, all over the world (currently it’s been shared 2,700 times), has reached over half a million people, and it’s just plain crazy. I appreciate the new followers (mostly!), but I have been struggling to keep up. I try to take a run through the comments a couple of times a day, but I know I’m missing stuff. Things will calm down – they always do – but in the meantime I really appreciate those of you who are answering questions other people ask – so thank you!

Just out of nosy curiosity what kind of work does Fred do when he’s not doing those other things you listed? Promise I’m not a stalker.

Which reminds me of a story (I am very chatty today, no?) – when we lived at Crooked Acres, the neighbor’s adult son asked Fred one day what kind of work he did. At that point Fred had been working from home for a couple of years. Fred explained that he was a software engineer/architect and he gave the guy LOTS of DETAILED information about what his job entailed.

When Fred was done explaining, the guy thought about it for a little bit and then said “So… you sit in front of your computer all day?” Fred allowed that that was about right. You could pretty much read the words the guy was thinking, they were written so clearly on his face: “I could sit and play games on the computer all day too. How do I get a job like that?!”

WHICH REMINDS ME OF ANOTHER STORY.

Fred’s grandmother (who passed away about 15 years ago) had no desire to learn about the details of Fred’s job, she knew she wouldn’t understand it all (she had no desire to understand it all, and I’M WITH HER), but she did want to be sure that he was still employed and she hadn’t missed anything. So when we’d see her, she’d ask him if he still “typed on the computer” for his job. Now when I don’t know what someone does for a job, I just assume they type on the computer.

Hello. I have sort of a random question. What is the medicine you use for kittens with goopy eyes? I recently got a one eyed kitten and his good eye is so runny and goopy all the time. He is on allergy medicine but I’m not sure that that is his problem. So I thought I would try some eye medicine.

I use Terramycin – you can find it online in lots of places and it’s a good general eye ointment.

Do mama cats get hairballs more frequently with all the kitten cleaning?

That’s a good question! They actually don’t – kittens don’t really shed until they reach 6-8 months, so mama cats aren’t ingesting that much fur from them.

Can you believe these muffins are FOUR weeks old today? 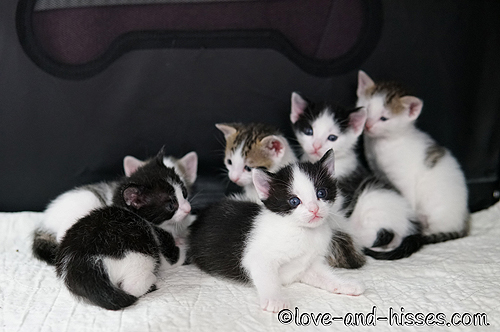 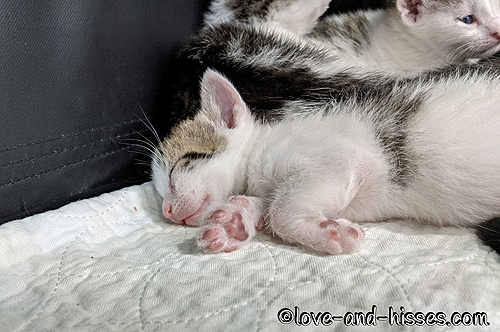 Pinochle has a sleepy. 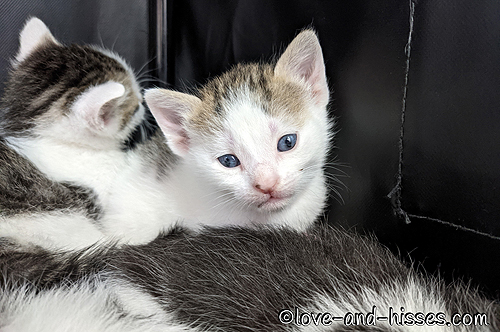 Whist has an attitude. 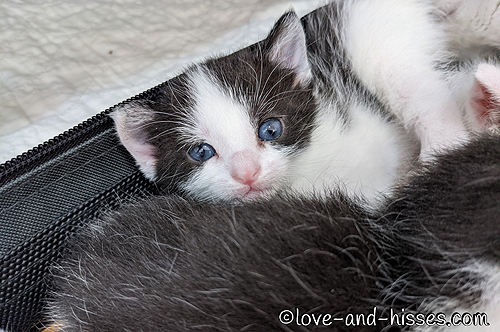 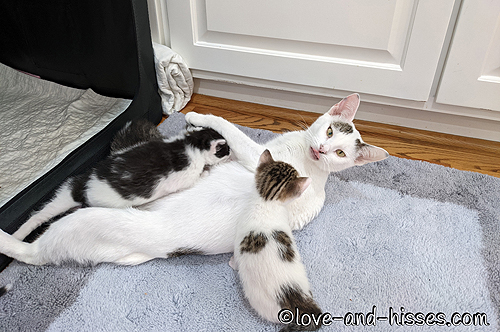 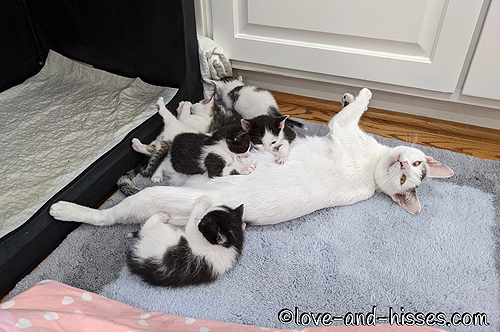 SUCH a good mama. 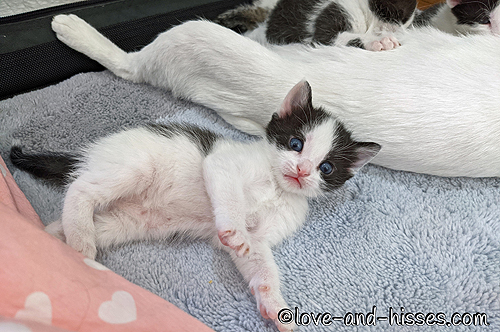 Uno and the Eyes of Amazement. 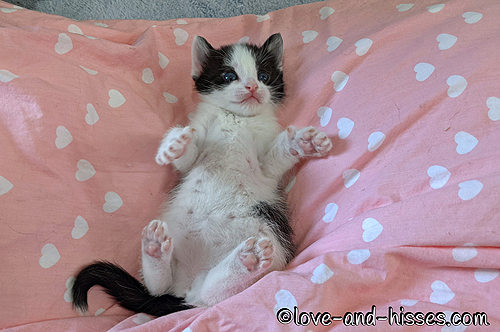 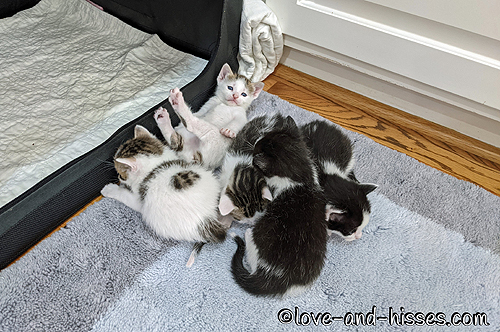 Whist with her feets in the air. 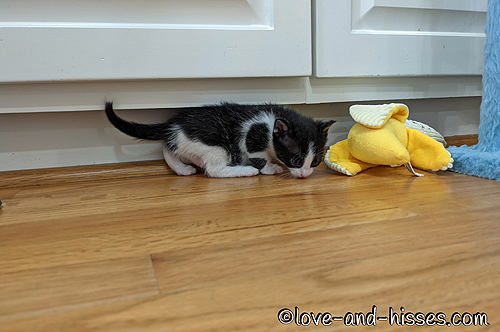 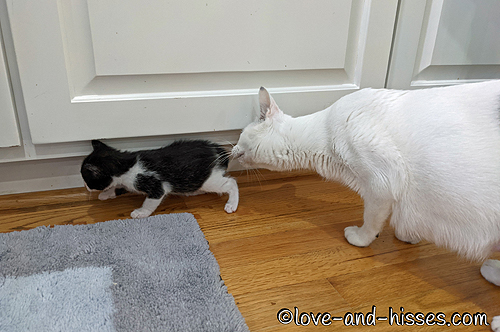 A mama’s work is never done. 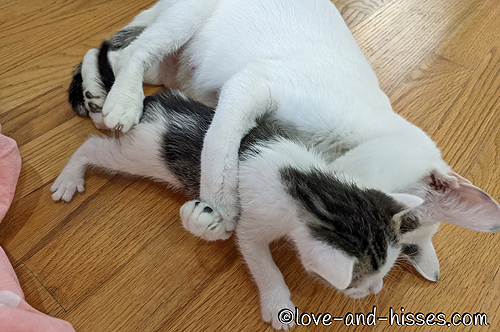 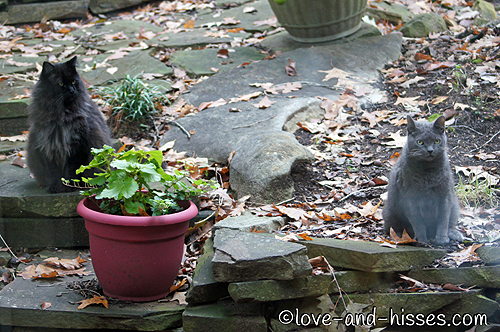 Khal’s face is killing me. He’s like “THIS idiot.”