Okay, so. I have a story for you. Back in November of 2009, I was “babysitting” two bottle babies for a woman who lived locally. She’d drop the kittens off on her way to work and pick them up afterward. Ultimately, she had to leave town because her father was in the hospital (in Texas), and she decided to sign them over to Challenger’s House. I was full up with the Cookies and the Wonkas at the time, so the bottle babies ended up going to another Challenger’s House foster mom, Heaven, after they spent a few days here. I didn’t name them, opting to let Heaven name them, since she was doing the bulk of the fostering. You can see pictures of them here and here.

Heaven named them Sootie and Sweepie, and eventually they went off to Petsmart and were adopted.

Friday evening, the woman who had adopted Sootie (the tuxie) went in to Petsmart. When she left, guess who she had with her? 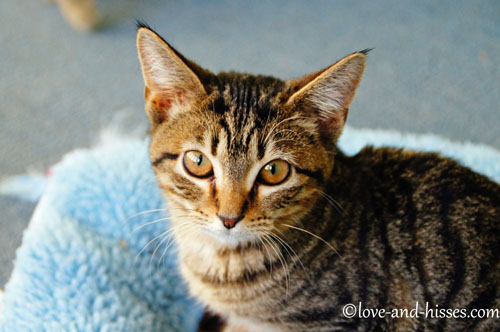 And then on Sunday, she said:

I adopted Baby Beans Friday night. He is the bravest, smartest little kitten I have ever known 🙂 He follows me everywhere and is getting along very well with my three year old tuxedo cat. I think they will be very good friends for many years. Thank you so much for fostering such a sweet boy.

I think it’s funny that in Friday’s post I was talking about how I hoped his people would come along soon – and then she did that very night!

I asked if she was going to rename him, and she said she’s calling him Bean – which I think is just perfect! (Thanks for the update, Nichole!)

And for those who asked to see a picture of Noelegy’s new orange tabby, who she saved from Death Row, here he is: 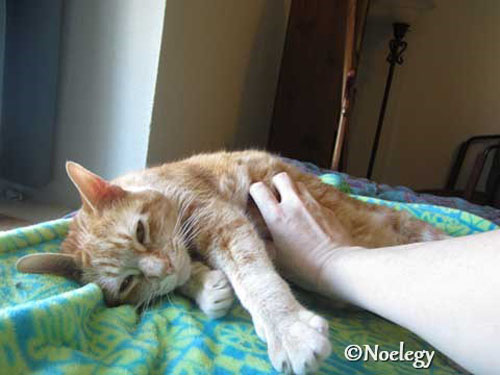 She also said, in Friday’s comments:

The new orange boy is now named Gary. My hubby immediately renamed him when I said I wasn’t crazy about the name Garfield, and the cat wasn’t responding to it anyway. When I immediately thought of “The Music Man” and the song “Gary, Indiana,” it stuck. Gary is just about the mellowest, most laid-back cat I’ve ever seen. So far, I have cautiously introduced two of my tribe to him, but he hasn’t joined the general population yet. My hubby is falling under his charms, because if there’s one thing my hubby is a sucker for, it’s an affectionate cat.

The reality is that I woke up Tuesday morning of this week just like any other morning, started reading my Facebook feed, and just couldn’t take one more of those “Urgent Death Row” posts. It sounds corny, but I decided that if this was all I could do was to change the outcome for just ONE of those animals, that was what I was going to do. I was prepared to love him even if he was scared and standoffish, but he immediately settled in and paid me back a thousandfold with love. The “urgent” postings still ache my heart, but I know I made a difference for this sweet little guy, and that’s a good feeling.

(Thanks for the pic and update, Noelegy!)

ALSO, I got another picture of a former foster, who you may or may not recognize, because he’s a big boy now! Let’s see if this face looks familiar to you… 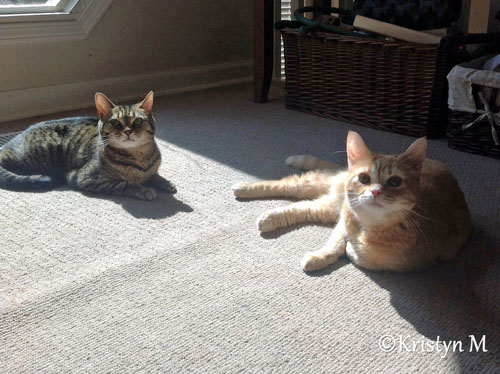 That’s Stompers! He’s all grown up, sharing a sunbeam with his sister Wisp. Kristyn reports that Stompers is still super sweet and snuggly. Awww, and he’s still got that sweet Stompers face! (Thanks for the update, Kristyn!)

And this post is just chock-full of cute pictures, y’all. My parents are visiting, they arrived Thursday (they’re the humans occupying the guest bedroom, obviously) and they brought with them…. 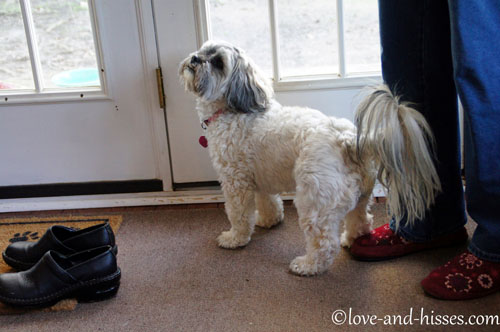 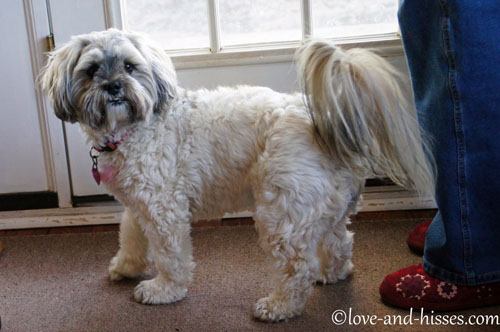 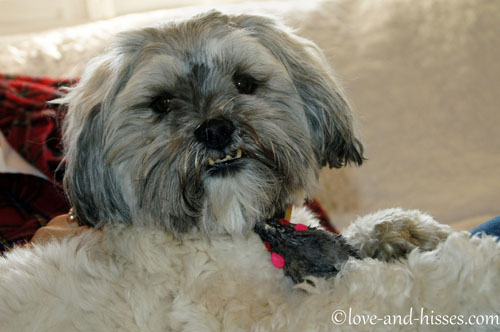 I love her underbite.

I put most of the cat toys away because I know that dogs chew more than cats do, and I didn’t want her to choke on a cat toy. She managed to find a toy mouse, though, and has been spending a lot of time walking around with the tail hanging out of her mouth. The longer I’m around her, the cuter she seems to me, because her personality is awfully adorable.

Molly is a Shih-Tzu mix, by the way.

The cats are dealing with her fairly well. Molly doesn’t go upstairs, so that’s where Miz Poo, Kara, Corbie, and Spanky are spending a lot of their time. Molly and Tommy have sniffed each other extensively (Tommy was not impressed), and Sugarbutt did some hissing. For the most part, they stay up where she can’t get to them, and at night she sleeps in a crate in the guest bedroom with my parents, whereupon the cats come out and sniff every inch of the house that Molly has touched.

Molly’s good about listening to my parents and for the most part she leaves the cats alone (though she’ll watch them very closely). It’s going really well, and the cats aren’t terribly stressed out, thankfully. 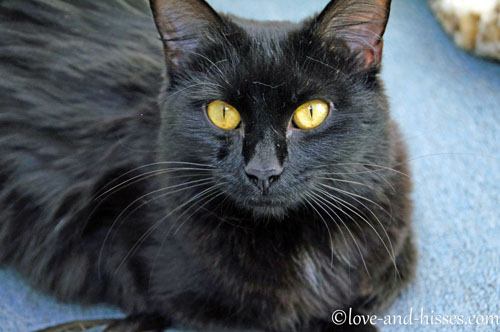 No babies yet. SIGH. 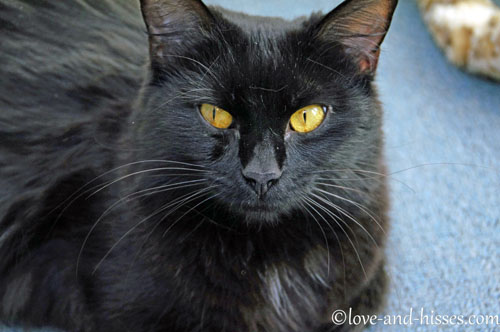 “Every time you ask where the babies are, I add two days on to my gestation period.” 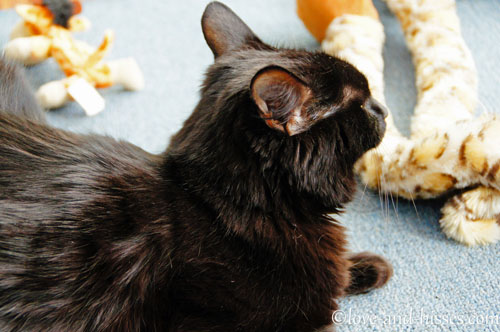 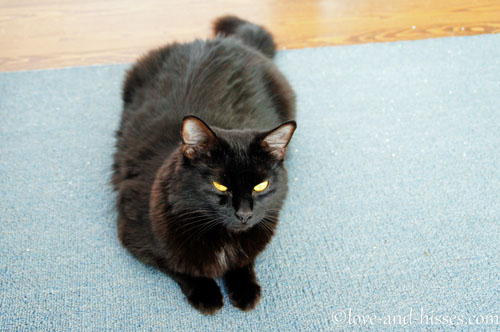 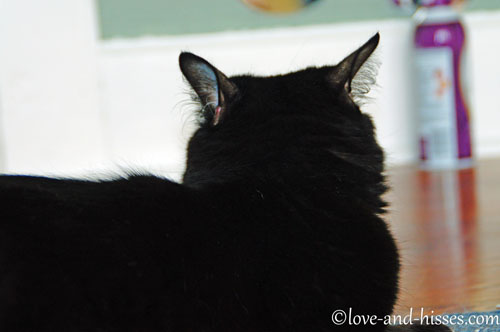 “Stop harassing me. I did some mathematic equations, realized exactly how those babies are planning to exit their current domicile, and I decided I’m NEVER going to give birth. Go away.” 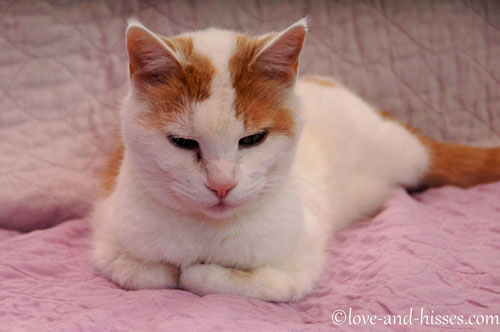 Old Man Spanky has been doing really well lately, still has that spark in his eye. He’s such a good boy. He even decided that Molly wasn’t much to worry about, and if he has to use the litter box or get a bite to eat, he does it and doesn’t worry about her.