I swear I’m not a skimmer, but things I’ve read don’t necessarily stick in my head. That said, what is a calming collar?

A while ago someone asked how to make a glutonous cat eat more slowly. Shadow is a young feral cat who can inhale a dish of munchies without taking a breath. Toby is an older stray who knows he will always be fed and likes to take his time eating. If I have time I make Shadow sit on my lap and eat out of my hand, one munchie at a time with several pets in between each bite. He will also do this for a friend who comes over regularly. (I’m trying hard not to have a timid cat only I can touch.) If I don’t have time, I spread his munchies on all the shelves of the cat tree. He eats faster than if I feed him by hand, but still has to go from munchie to munchie and shelf to shelf.

A calming collar looks like this, and is one of the potential weapons in stopping a damn cat from spraying inappropriately. It mimics the pheromone that mother cats produce to calm and assure her kittens, according to the box. I don’t know if it helped or not – I’m thinking not – but the spraying has lessened to almost nothing in the past few weeks, thank god.

I love your trick to get Shadow to eat more slowly!

Okay, with all of this banana-huffing how long with it be until Corbie winds up talking about his mercury surfboard, tiger blood, the fact he is a warlock, etc? How come your cats didn’t start yowling and screeching and carrying on to make these intruders run away? Sheriff Kara sure must run a tight ship.

Oddly enough, none of the cats get too disturbed by other cats that they can see on the other side of the fence. It might be a different answer – in fact, probably would be – if they actually came into the back yard with my cats, but for the most part they’ll watch any strange cats that come around, but they don’t have too much of a fit.

Also, it’s entirely possible that Rufus had been coming around for a while before we set eyes on him; it’s hard to know for sure!

BTW, did Corbie go AWOL anytime this week (for a few days, carrying his passport and a plane ticket)? No? Well, it looked just like him; my boy cat had come inside and was in the kitchen and our female cat was in there too. He has his food on the window sill because she has a special diet and she can’t get up there to eat his. I rushed in when I heard a horrible yowling noise, thinking she was throwing up a furball; sometimes she yodells a welcome to it! Either that or one of them was in terrible pain. There was the boy, on the window sill, looking out and down, his back arched and tail like a loo brush. I looked out and on the bench under the window, sat a tabby, looking all about, wondering where the “I’m gonna rip your head off” noise was coming from. I knocked on the glass, he looked up and saw me and the head-ripper looking back. I thought “Corbett Bookworm!” And he was gone!

You know, he DOES occasionally seem to disappear for a good part of the day, and then kind of reappear from out of nowhere. I wonder if he’s been working on that teleportation device at night while we’re sleeping! That cat tree is leaning rather dangerously under the weight of Elwood (aka “Ellie Belly”), but he doesn’t care. 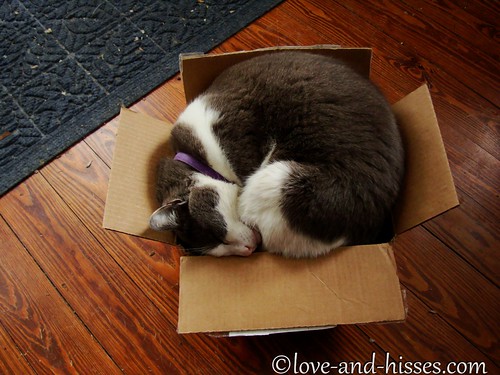 Joe Bob has really taken to that box for some reason. I think it kind of looks like the box is a muffin tin, and a freshly baked Joe Bob is rising up out of it.