Saturday, we went to Big Lots to see if they had It (the TV miniseries from 20 years ago) on DVD (Fred’s rereading the book, and has become obsessed with seeing the miniseries again), and while we were there, I wandered over to look at the Halloween section. All the Halloween stuff was half price, so I bought a few things. Then when we got home, I tossed the Halloween stuff on the counter and ignored it, as is my way.

Then late Sunday, I set up a fancy studio and began snapping pictures. Please do not be jealous of my fancy photo studio. 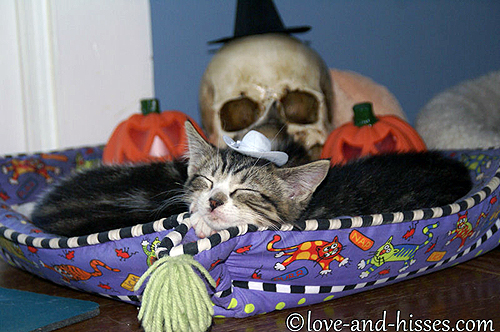 Apparently the best way to get a picture of a kitten wearing a hat is to wait ’til the kitten falls asleep and place the hat on his head so gently that he doesn’t realize it’s there. I’ll be keeping that in mind for next year. You know who I hardly ever get pictures of, and who is the sweetest, friendliest, most adoptable, should-be-snatched-up-in-10-seconds-flat cat in (temporary) residence? Rhyme, that’s who. I’m going to remedy that this week. In fact, maybe I can get enough awesome pictures of his awesome self for tomorrow’s post, and maybe someone will be mindlessly surfing the internet and stumble across the post about him, fall instantly in love, and set about adopting him.

Wouldn’t that be cool? Loony Jake seems none the worse for wear after being shoved into that chicken costume. Over at Flickr, Christy called him “El Pollo Loco”, and I laughed out loud.