I think we’re going to have to christen Newt the Ambassador when it comes to the foster kittens. I was sitting in there with the kittens yesterday morning, and noticed that Elle was showing an inordinate amount of interest in the door. I turned around and saw a little buff-colored paw sticking under the door, just laying there. When Elle ventured closer and sniffed the paw, it slid back under the door.

I opened the door and invited Newt in, and he came in without having to be coaxed. The girls all immediately puffed up, and there was a growl or two from a couple of them. Newt did a turn around the room, ending up at the food dish (don’t they always?), and had a nice little snack. After a little more looking at the girls, he jumped up on the cat tree and settled down. The girls milled around, tails puffed, eyes dark, and then settled down to stare at him.

“Come on, Newt,” I said after a few minutes. I had more litter boxes to scoop and a shower to take. He looked at me and was clearly all “Ummm, nah. I’m fine right here. I might eat a little more of that kitten food in a minute.”

“Okay, fine,” I said, and shut the door, making a mental note to come back when I was done with the litter boxes to let him out.

“Well, come on then,” I said, and shooed her inside. She came inside, I put the bags o’ poo on the side stoop, shut the door, and turned around to start opening the blinds in the computer room. I opened all the blinds on the windows over my desk, and when I turned back to the side door, Maxi was standing expectantly at the door. Clearly, she’d decided she didn’t so much want to be inside.

I sighed and opened the door. She walked partway out the door, and then paused there LIKE THEY ALWAYS DO.

“In or out,” I said, like I always do. When she didn’t move, I used my foot to push her the rest of the way out and shut the door behind her. As I turned the deadbolt, I glanced down at her through the window. She was standing there, seeming a bit hesitant and confused, and then I realized what I’d done.

I flung the door open, grabbed Tommy while he was still standing there trying to figure out how he’d made it to the Glorious (notfencedin) Outside, and brought him back inside.

“Disguising yourself as Maxi again, huh?” I said. I patted him on the head and went to the back door, where Mister Boogers and Sugarbutt were waiting impatiently, to collar them up and let them out into the back yard.

I took my shower, I did some cleaning, I went out and told Fred about the close call with Tommy (this morning when I let Newt inside, Tommy actually pushed his way out the door, and I had to go chasing him in my nightgown and Crocs, and it’s not like we live on a BUSY ROAD. He didn’t go far, though, just hung out under one of the bushes, and I was able to grab him up), I did some laundry, I ran some jars through the dishwasher. I took a little time and chilled out, reading. I did some more decluttering. I made my grocery list for tomorrow.

Around 2:00, just as I was thinking of eating lunch, I thought “Huh. I haven’t seen Newt today, have I? Did I let him outside?” It took a good couple of minutes of hard thinking before I realized that I’d left him locked in the kitten room with the fosters.

I ran upstairs, just knowing that Newt would be scattered in pieces across the floor – those girls could be vicious when they band together if they want, I can just tell – and when I opened the door, I found him sitting on top of the dresser by the door. The girls (except for Skittles, who was hiding under the dresser) were arranged in kitty meatloaves on the floor glaring up at him.

He stood, stretched, said “Why yes, I do believe I AM ready to leave this room, thx,” and ran off down the hallway.

I apologized to the girls, spent a few minutes with them to make sure they weren’t too freaked out (they weren’t – especially when I showed them the straws that were hidden under a pile of cat toys), and then went back downstairs.

I let Newt outside, and he raced off to points unknown.

After making sure dinner was progressing nicely (Crock Pot Swiss Chicken) and the current batch of jars in the dishwasher were still washing, and no laundry needed to be folded or put away, I settled in the front room, turned on the TV, and started watching the most recent episode of Grey’s Anatomy.

About halfway through the episode, Maxi came wandering up to hang out with me (Fred had let her in earlier). I patted her on the head and noticed that she had a piece of grass stuck to her hindquarters. I reached out, grabbed it, and it slipped out of my hand as Maxi turned to see what I was doing. I leaned forward, grabbed the grass more firmly, and pulled.

Which is when I realized that the grass hadn’t so much been stuck to her hindquarters as COMING OUT OF her hindquarters IF YOU KNOW WHAT I MEAN, and when I pulled on it, the last three inches came out, with a lovely surprise stuck to the end.

Maxi turned and gave me A Look, then ran off to flop down on the rug and lick at her behind. I went and threw the piece of grass in the toilet and then scrubbed my hands with antibacterial soap.

I turned the camera on, and it worked just fine. I took a picture, and it continued working just fine. 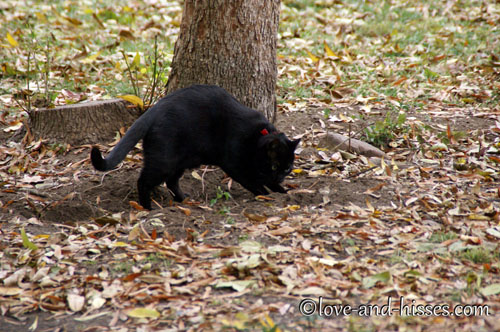 Dust bath hole for the chickens, or outdoor litter box for the cats? Why not BOTH?!