I’m hoping at some point to get out to the Smallville house and bring Momma Kitty, Daddy Kitty, and the kittens inside, since I’d like to keep them (temporarily, until they can be examined and fixed) in the master bedroom.

Oh, I guess I didn’t mention – Fred talked to the neighbor Saturday, and she told him that Momma Kitty had just shown up one day, so she started feeding her, then she had her kittens, then Daddy Kitty showed up (so she doesn’t think he’s really Daddy to the kittens), so basically they don’t belong to anyone. We’re having them all fixed, and she’s willing to take Momma and Daddy once they’re fixed, and we’re going to foster the babies until there’s room open at the pet store.

Naturally, they all disappeared Saturday afternoon and didn’t show up at all on Sunday, so we weren’t able to lure them inside (a task which shouldn’t be too difficult with the assistance of some soft cat food or ham or turkey, since these cats are total vacuum cleaners), but Fred’s going out to the house on Tuesday and will call me if they’re there, so I can go out with supplies to keep them pampered and fed and safe until we can get them to the vet.

I hope they don’t freak out too much at being brought inside, but every time we open the door and they’re hanging out on the porch, they seem very interested in coming inside. I hope we don’t traumatize them. Momma Kitty thinks you are acting very suspiciously and if you make any sudden moves, she WILL kick your butt. 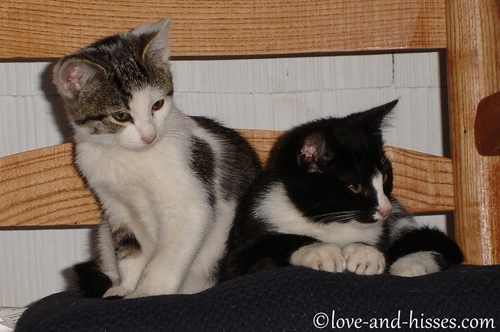 Two of the four. 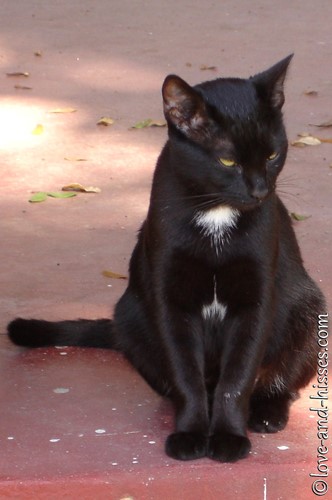