Now a question – within 2 months of each other. both of my male cats have developed a bladder obstruction. One is an inside/outside cat, one strictly indoor. They are now both on prescription food (Royal Canin S/O – expensive) and we are going to bottled water, not just filtered fountain water. Any other suggestions for keeping their bladders healthy (as well as my bank account)?? I have never had this happen to any of my cats before and I have had 7 others. Of course, now I am realizing these are the first males.

I didn’t have any helpful suggestions here, but Doodle Bean did:

Are your boys related? My Fuzz had all sorts of bladder crystals in his first 3 years, mostly due to a restricted urethra. That restricted urethra can be genetic. However, he never had an actual blockage. Just plenty of infections due to the irritation of his bladder from struvite crystals.

He had surgery to enlarge his urethra at about 3 years of age and has been great since. Before the surgery, what made it worse was hairball prevention food (the magnesium in that food can lead to struvite crystal formation) and feeding him dry food. What made it better was feeding him Friskies Urinary Tract Health wet food with a bit of extra water in it and keeping the litterbox incredibly clean. I’m talking scooping several times a day and changing all the litter and disinfecting the box every week.

He’s had several UTI’s since the surgery, but nothing out of the ordinary for a neutered male. Also, none have gotten as bad as the ones he got before the surgery.

You know, I’m just realizing how much I’ve learned from that cat! I guess when you have a cat for 17 years the lessons add up – especially one who was neglected and abused for the first 6 months of his life!!

About Miz Poo’s bed – it’s the blankey that’s supposed to be self-warming, right? Because I’ve been thinking about getting one for my senior girl. She’s always cold and I’m afraid of getting anything I have to keep plugged in. Yes, that’s the self-warming/ thermal cat bed. We have several of them, and they’re all pretty popular. You can find them on Amazon right now. There were some cheaper ones (the same bed, but a different color) a few weeks ago, but they seem to have gone out of stock. I didn’t find them any cheaper elsewhere on the web, but that changes by the minute, so it wouldn’t hurt to ask Google for help.

I should add here that the beds make a crinkly sound when the cats walk onto or across them, because they’ve got (I assume) mylar in the middle (that’s what reflects the heat back at them). It doesn’t bother my cats or any of the kittens who’ve tried them, but it might disturb a more sensitive kitty.

Or a three-bean salad! 🙂

Quick question-Is there a reason kitties start clawing on the wall? We are pretty sure there is not a dead body behind it. So why is the wall getting clawed up and what can I do about it?

Also, Connie mentioned that citrus might help deter them from scratching the walls, and suggested rubbing lemon or orange rind on the wall. (Bonus: your wall will smell good!)

The game cam video is hilarious. Who is that at 0:42-0:50? I love the staring and waiting, and then the pouncing prep — and the pouncing. So cute.

That’s Percy! (Direct link to that section of the movie here.)

I love the shelter for the ducks. Has Fred thought of putting a floating one on the pond so they have someplace to escape to if predators come around. I suppose you don’t have to worry too much about that with the Gs on the job.

I don’t know if he’s thought of that, I’ll have to ask! I’ve seen the ducks out there, floating around, sound asleep with their heads tucked beneath their wings. It’s the neatest thing. But with George and Gracie on the job (ie, dead asleep in piles of leaves), I think the ducks are safe.

Actually, I think that George and Gracie’s presence does deter a lot of predators. I can vouch for the fact that EVERY time George and Gracie see a plane go overhead, they chase and bark at it, and we’ve never had a plane land and mess with the ducks and chickens. True story!

I hope the Baby calms down and gets more brave. Do you know his background? With that face and knuckly paws, I wonder if he has Bengal in him and that’s what makes him skittish.

I’ve been meaning to mention Baby Beans’s story. He was found by the side of the road by a good Samaritan and taken to a vet. He was about 7 weeks old and half-dead, with very pale gums (anemia caused by fleas). He was nursed back to health, syringe fed, and eventually became healthy. His name was originally “Babee”, but his first foster mom added “Beans” to his name because he apparently has great love for pork and beans. Isn’t that cute?

Of course, we don’t know if he’s got any Bengal in him, I’d sure love to know!

I do wonder about the kittos from the beginning of the year because you didn’t include an adoption status with some of the ones at the start. Did all of your fosters from 2012 find permanent homes?

All of my fosters from 2012 did, indeed, find permanent homes! In fact, all the fosters I’ve ever had have (excepting the Beans, of course, who aren’t up to date on their vaccinations just yet) have been adopted. Isn’t that awesome?

Those two little orange guys are adorable. They could snuggle with me all the time. When do they go to their new home?

They’re scheduled to go home the weekend of January 12th. Which means I get another week to love on them. As you can imagine, it is SUCH a hardship!

Thought of you, Robyn, when I saw this towel – I think they need to double the # of cats, at the very least, tho! LOL

Oh good lord, that is so cute! I totally need a set of those, don’t I?

As always, the shots of Cruella and Rock Star made me laugh. Are the fancy hens good layers also, or are they just for pretty? This reminds me that I completely forgot to point out the way two of the Rock Stars’ head feathers seem to be forming a little heart. See it, straight up from her beak? Isn’t that neat?

The fancy hens are not great layers. They’re more for our entertainment than for their egg-producing ability. I should add, though, that the white Silkie (the one I refer to as The Angry Muppet) is the best mother we’ve ever had. She’s super protective of her chicks, and those babies stay with her until they’re practically as big as she is.

So, is Sheriff Mama ALWAYS angry? Or, does she lower herself to accept some lovin’ now and then?

She’s really only angry if her humans are outside the back yard. Otherwise, she’s very sweet and likes a good snuggle. She’s kind of intense and always looks like she’s going to snap and remove your head, but she’s never snapped on her humans (and only on kitties who are misbehaving), so I think it’s just the way her face is arranged.
Kind of like Mister Boogers, who always looked intensely filled with hate, but was actually a complete and utter lovebug.

I have a question for the Fount of Kitteh Wisdom. We have a dog who’s been staying with us more or less permanently. Her owners sent over a couple of really nice dog beds, and one or more of our cats has been peeing on these beds. We’re pretty sure it’s either Murphy (12-year-old black male who intermittently pees on the tile floor by the back door) or Gabby (18-year-old calico who spite pees on occasion). I don’t know what to do, and my husband is at the end of his good nature over this, and keeps threatening to put these cats outside (neither has ever been an outdoor cat). He tried wrapping the core cushions of the dog beds in garbage bags, to make a moisture-proof barrier (the covers are washable), but someone’s still peeing on them every night, and the dogs won’t use the beds.

It seems like a territorial thing: something that doesn’t belong to this house has been brought into this house, and someone’s not happy about it. What can I do to make the dog beds part of the cats’ accepted universe (the dogs themselves don’t bother the cats)?

It definitely sounds, since they’re targeting the dog beds, that they’re not happy with the dog’s addition to the household. It is entirely possible, though, that there’s something about the dog beds themselves that is setting the cat or cats off. Could it be the location? Have you tried them in different spots? You may want to try spraying the dog beds with Feliway – it might work.
Honestly, if it were me, I’d put the nice dog beds away, buy a couple of cheap (easily washable) ones, and wash them as need be. Alternately, I’d buy some of those washable waterproof pads and put them on the dog beds to protect the beds from the angry pee-ers.

Come on, readers, I know y’all have some great suggestions for Noelegy – feel free to weigh in in the comments! 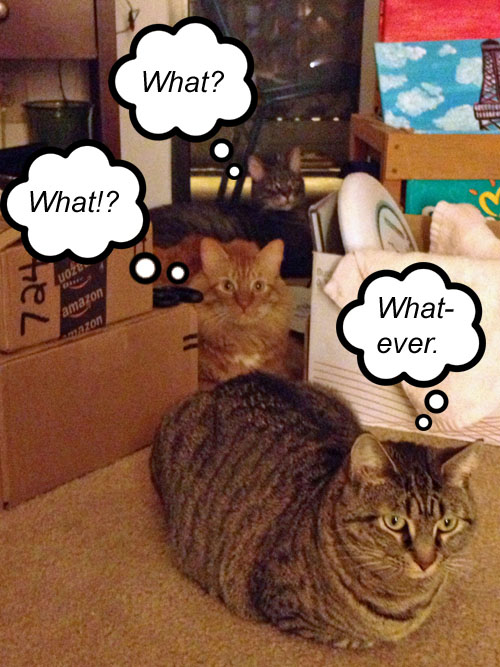 Doodle Bean took the picture of Maggie and her brothers and did a bit of photoshopping. It made me giggle, I figured y’all would enjoy it too! (Thanks again, Doodle Bean!) If there’s one thing those Beans – especially Barney and Bitsy – love to do, it’s sharpen their claws. Baby Beans has a straw obsession. If it’s even vaguely straw-like, it’s HIS. He’ll come flying from across the room to grab it and chew on it. “Yeah, feathers are OKAY, but straws are BETTER.” Bitsy and her pretty, pretty eyes. Baby’s eyes are awfully pretty, too. Sungold, keeping an eye on things. I love how it looks like Sungold is trying to pose with Miz Poo, who’s having none of it. Another Game Cam video! This is of the Pickles and Weeds, running and chasing. There are some pretty good gymnastics! Also, you see more of the Weeds girls than in yesterday’s video.

I’ve had these next four pictures for months now, I got them from his foster mom/ rescuer Winnie. I’ve been meaning to share them with y’all, but kept forgetting!

Here’s Joe Bob as a kitten! I love that he’s got that same Joe Bob face, only smaller. The black and white cat you see in a couple of the pictures is his sister, Moondance, who we nicknamed “Myrtle” (Joe Bob’s first name was Moonman).