Hey, remember Starsky and Hutch? Of course you do! It has been a while but thought I would send a quick update on the boys in Indiana..

The Christmas tree survived by being held in place/upright by 4 cinder blocks. Yeah, it got roughed up and the lights moved around a bit, but it survived. Next year oughtta be a hoot since they will be even bigger. If that tree’s a rockin – – RUN!. They are slowly getting bigger. They are mostly legs still. Very teenager acting. It is all about playing and tormenting the older cats now.

Jack finally convinced Percy the ladder to the bunk bed was a cool thing to climb. Percy still isn’t crazy about getting down and it is far from graceful. And of course – -Kiefer thinks the extra cat in the bunk visiting him is great. 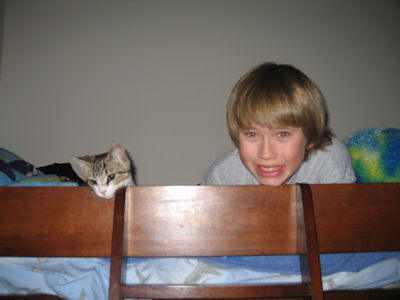 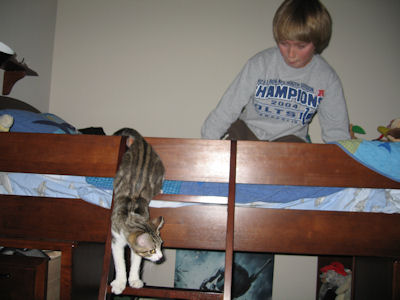 So they like to think about running outside every time the door opens? Think that snow looks great? Go ahead, let me know whatcha think. Obviously, they thought it was cold but not smart enough to figure out to run back to the door to get warm. Big brother Kiefer settled for throwing snow at the back door for their enjoyment. 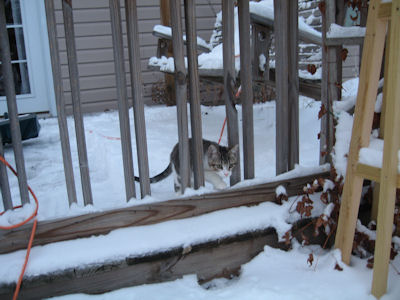 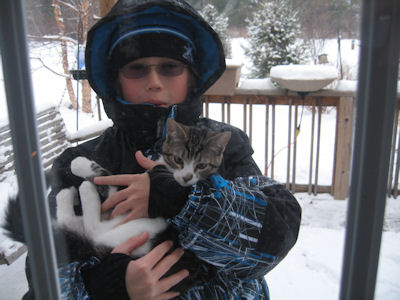 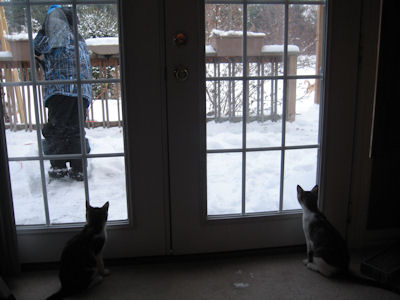 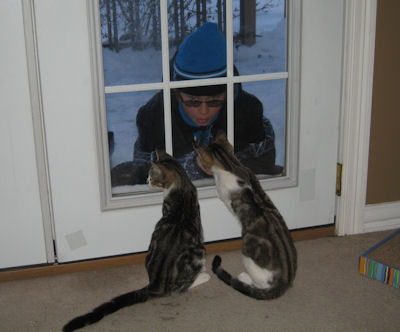 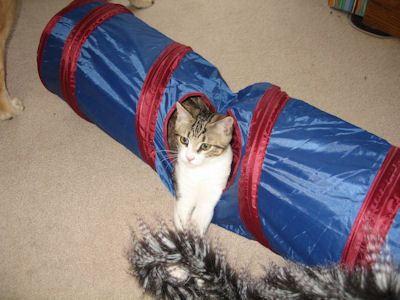 They are absolutely hysterical and sweet as can be (when they are asleep). They rule/run the house right now. Kiefer mentioned last night – – the house used to be quiet before the kittens lived with us. Yeah, and there wasn’t cat hair on my kitchen table either. But it looks great there! And I do believe Big Bird looks like he lost half a pound. Probably because he is running for his life most of the day! 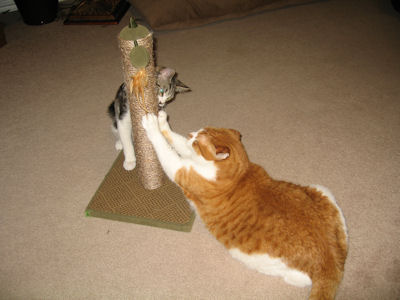 oh yeah – – it may not be more than 4 cats lined up for tuna treat time but this is an accomplishment!!!! Jack and Percy start standing in their food and the plates go everywhere. Newman usually scatters out of the starving kittens way, and Bird – – believe it or not, he isn’t crazy about tuna… To top it off – – – Willie dog is sitting there waiting for leftovers!!!! 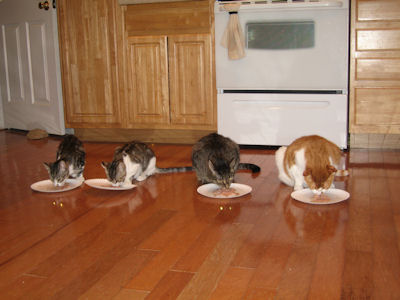 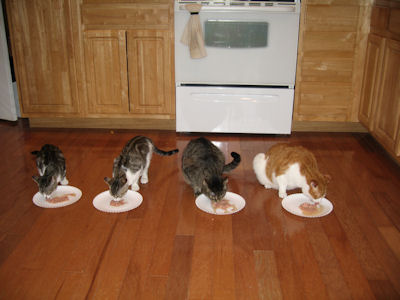 From left to right (or smallest to largest!!): Jack, Percy, Newman, and Big Bird

Thank you so much, Jennifer and Kiefer – I sure do like seeing those boys grow. You aren’t kidding about them still being all leg!

Previously
2010: It was a nice surprise to unexpectedly see their little faces again!
2009: Hello, gorgeous.
2008: Did I mention that Skittles is a pretty girl?
2007: Moonman has earned himself the nickname “Joe Bob” for no reason other than it’s a good nickname for him (also, I occasionally call him “Joseph Robert”).
2006: No entry.
2005: No entry.