Kara came to us as a very pregnant cat in April of 2008. She was very friendly from the moment we brought her home, and when she gave birth 24 hours later, she was okay with us being all up in her space. She never minded us handling her babies (she had four), although if they cried she’d run right over to see what we were doing to them. She’s always been the sheriff in charge of smackdowns, and this was made clear to us pretty early on. Mister Boogers was very interested in what was going on in the foster room and would hang around outside the door. We were careful about stopping him from running into the room, but one day I wasn’t fast enough to stop him. He stalked into the foster room, intent on showing those kittens and Kara just who the boss was, and Kara absolutely kicked his butt. By the time he turned around and ran back out of the room, there were tufts of gray fur everywhere, and it was just happenstance that I managed to catch Kara and push her into the bathroom (which is right by the foster room) before she chased him down the stairs and killed him. She’s been in charge of everything ever since. She was an outstanding mama to her kittens, and she got along okay with our other cats. The kittens went off and were adopted, and finally it was Kara’s turn to go to Petsmart. She spent about a week and a half at Petsmart before we missed her so much that we went and brought her back home. She’s been keeping an eye on things ever since.

I often call her Kara when I’m talking about her to Fred, but more often we call her “Mama”, and if there’s a question about which Mama we’re talking about (Maxi’s also “Mama”), we clarify it by calling her “Upstairs Mama” because she used to hang out upstairs in my room a lot of the time, especially at night. There was a time when there was a nightly kerfuffle between Kara and Miz Poo because Miz Poo would jump up on the bed with me, of course, and Kara took exception to that. She eventually learned that we do NOT pick on the old lady of the house (even 4 years ago, Miz Poo was the old lady of the house!) and there was an uneasy peace. Over the past couple of years, Kara stopped coming upstairs and made the top of the dryer – which is located directly next to the back door – her favorite place to be. There are other places she hangs out – sometimes on top of the kitchen cabinets with (not WITH, but in the general vicinity of) Stinkerbelle, sometimes on top of the canning cabinet in the dining room. But we still call her “Upstairs Mama” because “Dryer Mama” doesn’t quite have the same ring to it.

As part of her sheriff duties, Kara is a worrywart. If she’s in the back yard and she can see us through the fence, she squeaks at us until we’re where she can get to us – and then she scolds us. She’s always thrilled to see us, and will run over to us any time we set foot in the back yard. She’s one of our cats who absolutely adores going out in the back yard, no matter the weather, and if she’s not actually outside, she wants to sit on the dryer and keep an eye on the back yard through the window. She takes her duties seriously.

She’s also our tiniest cat and weighs around 8 pounds. Also, despite her past as a very good mama, she has NO use for kittens and will smack them if they get in her space.

See more pictures of Kara over at Flickr – when she was our foster, and after she became ours, or in the slideshow below. 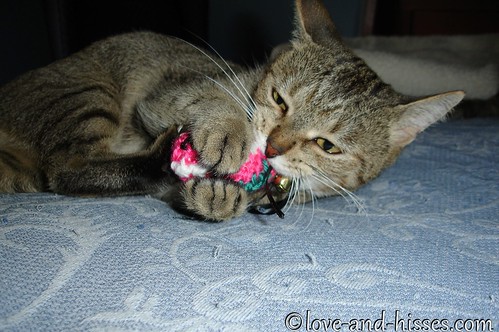