She came from an outside colony of cats, and is clearly not feral. She is young – about 10 months old – and we’re pretty sure she’s pregnant given the size and roundness of her belly, and the fact that she’s an unspayed female cat who was living outside among unneutered males. (I am guessing mid-January for kittens, but could be longer.) She’s a bit unsure about being petted, but she’s definitely coming around. I imagine being in a house is pretty weird to her, so it’ll take time for her to figure out what this all means.

The naming theme for Moira Rose and her future kittens is the TV show Schitt’s Creek. The name for the litter as a whole is The Rosebuds.

We’re looking forward to meeting those kittens! In the meantime, Moira plays, eats and flirts with (permanent resident) Uncle Charlie.

Updated: It turns out Moira Rose was NOT pregnant, just a little chunky. She was spayed the day we found that out (since she was already at the vet), and was adopted and went home on January 9, 2020. You can follow her – and her two brothers – at Facebook, here.

You can read about Moira beginning here. There are links at the top and bottom of each entry; click on the one on the right to take you to the next entry.

You can see all the pictures taken of Moira (and her eventual kittens) here at Flickr, or scroll through them below. 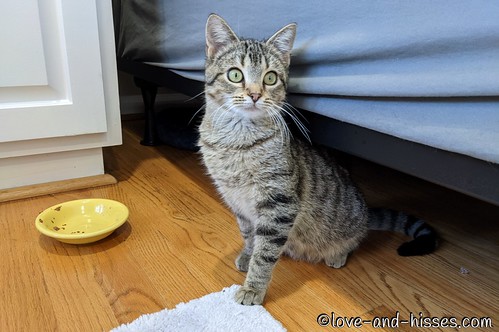