Natalia came to us on January 11, 2020. She’d been showing up at someone’s house for a few months and no one in the neighborhood knew where she’d come from. She was very thin, but with regular feeding from kind people, she gained weight. And then she started to get a round belly, so they worried that she might be pregnant. With bad weather due, they asked Forgotten Felines of Huntsville for help, and she came to me.

We couldn’t decide whether she was pregnant or not – and we realized pretty quickly that she had worms, so that could explain the round belly. A few days after we got her, she went to the vet for an ultrasound, but when they checked her tummy for a spay scar, they found one. (She was scanned for a microchip, but wasn’t chipped.)

This adorable tortie with a half tail and soft and silky fur is a true sweetheart. She’s a total love bug and in fact is hard to take pictures of because she races right over for love as soon as she sees me. She loves being petted, loves to snuggle up on the couch, and rolls around on her back while kneading the air and lets you rub her tummy. Per the lady who was feeding her, she gets along great with dogs, big and small. She’s caught the occasional glimpse of our cats, and is just curious about them, so would likely be okay in a home with other cats. As long the humans give her love and snuggles, I suspect she doesn’t care who else is around.

You can read about Natalia beginning here. There are links at the top and bottom of each entry; click on the one on the right to take you to the next entry.

You can see all the pictures taken of Natalia here at Flickr, or scroll through them below.

Natalia was adopted on January 20th (a mere 9 days after we got her.) She joined a family with a 2 year old boy. Unfortunately, it was discovered that Natalia is not a fan of small children and would be happier in a home without one, so she was returned in June. And on July 8th, she was adopted again! 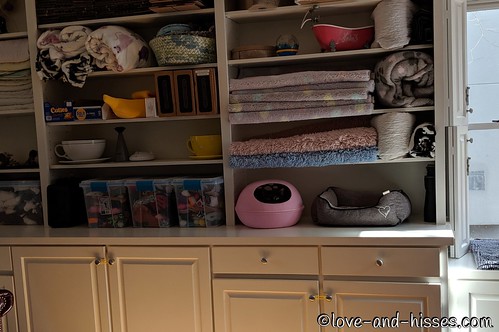