Kokomo (Koko) came to us on January 19, 2016 at about 9 months old. She’d been found stray in rural Alabama and was brought to a local veterinary clinic. She stayed there for a week, they determined that she was probably pregnant, and so she came here.

After cooling her heels in the foster room and eating copious amounts of Gerber chicken baby food for three weeks, we started to have our doubts that she was actually pregnant. And then she went into heat and we REALLY had our doubts. After an x-ray and then an ultrasound, it was determined that she was a big ol’ faker. She was spayed on February 11th, and headed off to Petsmart on March 3rd.

She is a super sweet and cuddly girl who loves to lay and have her belly rubbed. She loves kisses on her face and the top of her head, and she will lay down next to you for as long as you want to pet her. She would have had wonderful kittens, we’re sure, but we’re thrilled that she won’t have to go through the whole process of birthing them and then raising them to be productive members of society. Now she gets to be the kitten!

You can read about Koko beginning here (there are links at the top and bottom of each entry; click on the one on the right to take you to the next one). You can see all the pictures taken of her during her stay with us here at Flickr, or scroll through them below. 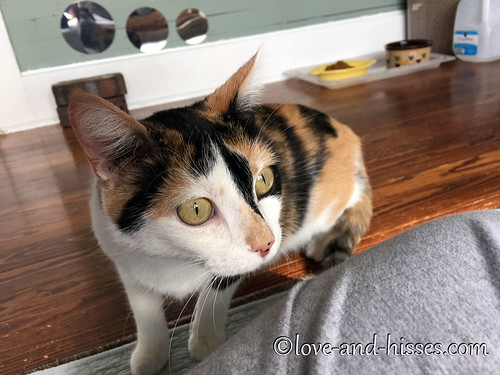