The Greasers – Ponyboy, Sodapop, Darry and Two-Bit – came to us on September 10, 2016. They were trapped as part of a local TNR project, and went to Challenger’s House trapper/ foster mom Winnie for a couple of weeks before they came here. They’re named after characters from the S.E. Hinton novel The Outsiders.

They were skittish when I first brought them home, but with some time and attention, they’ve proven themselves to be total lovebugs (at the time of this writing, they’ve been with us for a week).

Darry is still a little nervous if you’re up and walking around the room, but if you sit down and pull him into your lap, he purrs and purrs. He has a very serious little face, but is a total lovebug (and likes kisses.)

Ponyboy likes to spend his time (when he’s not playing) in the top of the little blue cat tree; to get him to purr, you only have to look at him – he has a VERY loud purr. He loves to be held on his back like a baby, and enjoys a good belly rub. He will walk from one brother to the other, presenting his ears for licking, until one of them (usually Two-Bit) gives in.

Two-Bit is a laid-back boy, and will come right over to you if you call him. He loves to roll onto his back and expose his belly. It’s a trap – he likes to bunny-kick your hand – but he’s pretty gentle about his bunny kicks, so it’s not the most terrible trap you could fall for.

Sodapop will climb right into your lap or flop down against your leg. He purrs nearly as loudly as Ponyboy. He loves to be near one of his brothers (he and Two-Bit spend a lot of time near each other) and he’s the most playful of the four. He’ll jump on any of his brothers who happen to walk by, and if you toss a toy, he’s after it in a flash.

You can read about the Greasers beginning here. There are links at the top and bottom of each entry; click on the one on the right to take you to the next entry.

Edited to add: All four of the Greasers were adopted on October 18th!! Ponyboy and Two-Bit went home together, and Darry and Sodapop were adopted individually.

Edited to add: Sadly, Ponyboy was diagnosed with FIP in February 2019, and has passed away.

Edited to add: Darry was unfortunately returned to Challenger’s House in August of 2019 – but then he was adopted in October! Yay, Darry! 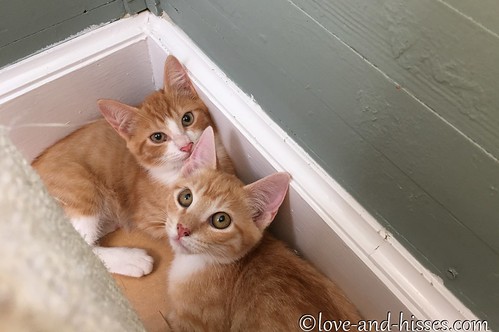