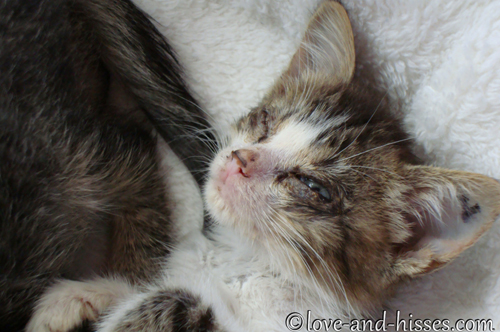 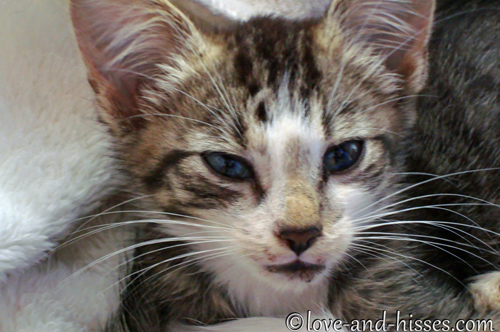 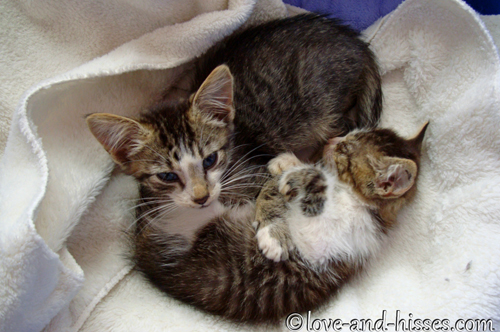 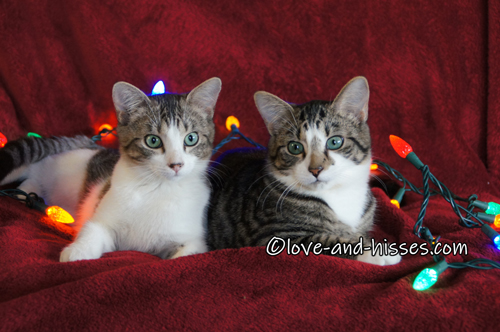 Charlie and Patty came to us on September 5th, 2011 – Labor Day. Charlie was found under a car, wet and shivering. The people who found him frantically called the shelter, thinking he was 2 – 3 weeks old and needing to be bottle fed, and we agreed to take him. We picked him up and popped a bottle in his mouth – which he drank completely – before realizing that he was actually 5 – 6 weeks old.

He was dirty and covered in fleas, and had cuts around his mouth and a chipped left canine tooth. We set him up in a warm, clean cage and cleaned him up as best we could, then a few hours later got a call that his sister had been caught by a neighbor of the people who gave us Charlie. Of course we took him too. Patty was in worse shape than Charlie, and when they were seen at the vet the next day, it was discovered that they had just about every parasite possible.

They’re slowly getting better and we hope that it won’t be long before they’re running around and playing like real kittens.

(Regarding the naming: since we had The Peppers Gang already, and because I like that naming theme, I kind of piggybacked Charlie and Patty onto the same theme. You can never have too many Peppers!)

Charlie is very protective of his little sister, and at this point in time (5 days after they came to us), they’re spending a lot of time curled up, sleeping.

As of January 5, 2012, Charlie and Patty Peppers are at Petsmart, waiting for their forever home.

Updated to add: Charlie and Patty Peppers were adopted on January 21, 2012, TOGETHER!!!!

See all the pictures I’ve taken of Charlie and Patty Peppers over at Flickr.