(Fred wrote this and posted it on his now-defunct blog. He tracked it down for me, and I’m posting it with his permission.)

The small gray and white cat was bored. Hell had been a blast in the beginning, a real party. All that fire and brimstone, smoldering souls and the torture of those silly damned humans. Being at the big man’s right hand since his arrival several weeks ago had its perks. But now, the fun was gone.

“If you’ve heard one paltry human soul shriek in agony, you’ve heard them all,” the small gray and white cat was fond of telling Artemis, the Deputy Director of Demons. “I was a much more effective torturer back on earth. I drove the humans crazy. I wonder if the big man would let me go back…”

“You know that’s against the rules, MB. Once a cat crosses the portal to hell, there is no return to earth.”

“Rules were made to be broken, Artemis. Have you forgotten who I am?”

The small gray and white cat puffed his chest out and fixed a hateful look on the demon.

“I know, I know,” Artemis said, and sighed exasperatedly. “You are Master Boogers, Feline Familiar to the Chief.”

“That’s right. And I gets what I wants, or I pees on the Devil’s couch. And I blames YOU for it.”

Artemis’s eyes narrowed as he contemplated the punishment Satan would mete out for such an infraction.

“Perhaps there is something we could do,” he said.

“I like them,” the small gray and white cat said, when he saw what Artemis had made him. “I like them a lot. I can see the hate in them.”

“They’re the best I can do on short notice,” Artemis replied, looking rather proud of his humility.

“They are absolutely perfect. Especially that one. He’s especially handsome.”

The small gray and white cat whipped his stumpy tail back and forth in a fury.

“You’re sure this will work, Artemis, that it will be almost as good as being there? That it will be just like torturing my old people myself?”

“Then I shall call them…mini me’s. SEND THEM OFF NOW!”

Master Boogers rubbed his paws together and cackled until he choked on an errant cinder.

“He said it would take a couple of months, but he said that last time, too,” I said to Robyn as I got back into the car.

We sat outside the furniture shop of our old friend Emery, with whom I had just been conversing with about a handmade shelf unit for the upstairs bathroom.

“Two months is fine. He does good work,” Robyn replied. “And you can’t beat that price.”

The trip home seemed eternal, because we stopped several times along the way. Finally, though, we were back home and turning into the driveway. Coming home always makes me happy, because I love seeing all the animals waiting — Mama and Newt by the side stoop, the maternity chickens looking up to see if the scratch man is coming, the turkeys plodding around their yard studying the grass, and the big yard full of chickens, dogs, and pigs beyond.

We got out of the car and unloaded our purchases (hooray for $1.50 cantaloupes and $2.00 watermelons from the Amish!). About halfway to the side stoop, we both stopped, dumbfounded by what we saw.

Someone — or someones — had visited while we were up in Amishland, and they’d been bearing gifts.

We found some egg cartons: 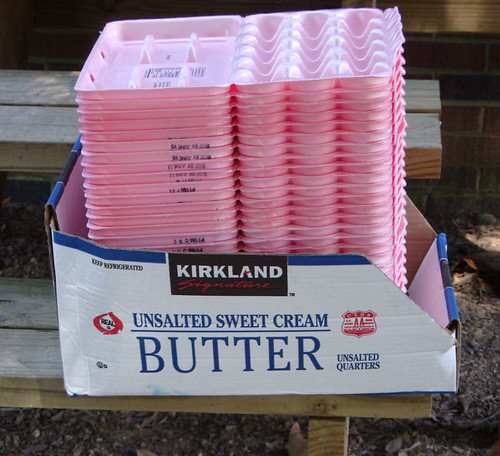 A bowl of cat food: 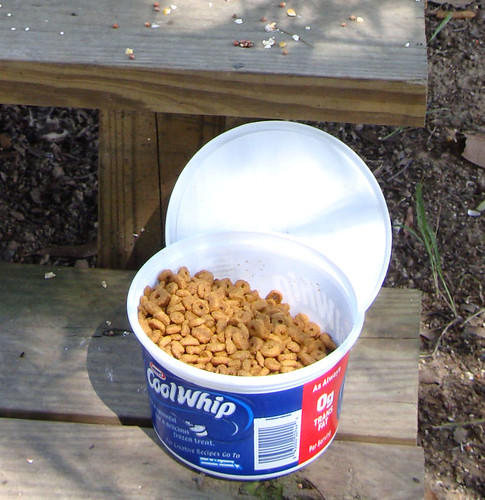