Recently, Fred discovered Fiverr.com, a site where you can pay $5 to have someone do just about anything (within reason). What he did, of course, was immediately commission a picture of one cat, and then from another artist altogether, he commissioned another.

Both artists did a pretty good job, but I think I kind of prefer the one that did Sugarbutt. 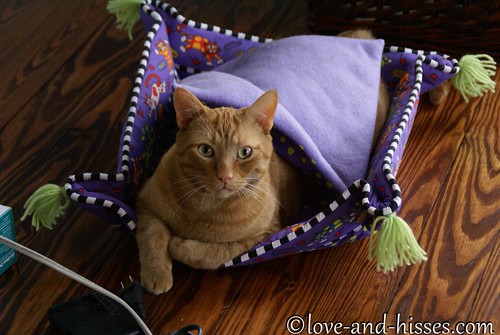 In former foster news, the shelter manager told me that she saw the people who adopted Rufus last week. He’s doing well, is best friends with their dog, and he and the dog play and share toys. Awww.

This was Rufus, in case you don’t remember – he showed up in our yard suddenly one day earlier this year, and I was so worried that he was a pregnant female (he had a big round belly) that I insisted Fred go out and trap him: And in other former foster news, the people who adopted Ciara and Coriander together this summer stopped by Petsmart, and I heard that they just love those girls to death, and the girls get along great with their Lab. Ciara and Coriander when they were here with us.

I’m always glad to hear about my former fosters going to homes with dogs, and adjusting well. Since they’re not exposed to dogs around here, it’s something I worry about, but given how many well-adjusted stories I’m hearing, I’m going to stop worrying!

Patty and Charlie are doing well – they still don’t quite understand why they’re not allowed in the foster room any more, but last night they stood in the hallway outside the room and hissed under the door at the Sons, so I’m not in any hurry to let them in to visit! This shows the amazing green of Patty’s eyes. Charlie, getting ready to complain. Patty, showing off her claws.

I think I forgot to mention that on Saturday, I opened the closet off the foster room, and moved the litter boxes in there so that the boys would have more room to run around. They seem to like it quite a bit – when I’m downstairs, I can hear them thundering around from the room to the closet and back again. I don’t know what’s going on over there, but it’s certainly got Opie’s attention. You know you wanna rub Opie’s belly (whether or not he’ll let you is another matter altogether). “LADY, I AM TRYING TO NAP. STOP TAKING PICTURES OF ME!”