Are the Weeds “sisters from other mothers”, or are they all from the same litter?

They’re all from the same litter – their mother is white with one blue eye and one green eye!

How big are the Weeds now, I think my Oreo is about the same size so I was just curious.

I weighed them last night. Thistle and Dandelion both weighed 4 pounds 1 1/2 ounces, and Purslane weighed 4 pounds 2 ounces. In other words – they’re half (or less!) the size of the ‘Maters & Kohle!

Are [the ‘Maters and Kohle] still running from the road sounds?

Only when a very loud vehicle goes by, and even then they just run in and then immediately come back out.

Confession… I have to fight the urge to speak in a Southern accent, even though I have never lived anywhere near the South. I just love the accent so much!

The comment in your extravaganza about naming a litter after Steel Magnolias gave me an idea for one. Name them after elements on the periodic table. You could have Neon, Hydrogen, Copernicium, etc.

Wait, is that picture of Cruella before or after?

This is Cruella before: The difference isn’t obvious – even though I felt like I cut a million feathers from around her eyes – but she can definitely see better than before.

Also — did the appraiser love the kittens as much as they loved him?

The appraiser thought those kittens were pretty darn cute. 🙂

I assumed that the dogs were kinda chubby and unfit from laying around and watching the chickies. Man,o man,Gracie proved me wrong!

Yeah, they’re definitely not chubby dogs. They lay around and nap all day long, but they’re fairly active at night, so they keep pretty fit!

Do you have any variations on Magoo’s name? I ask because it is so easy twist that cute name around. My guy is Goo, Goo-Goo, Mr. Magoogoo, Goo-bear, Quincy (The cartoon character’s first name), Maglue (when he’s being clingy), Magut (he’s got a belly), I could go on and on!

Ha, Maglue! That’s excellent. I had taken to calling him Goo occasionally. Fred never referred to him by his REAL name of Magoo, usually called him Tony Rocky Horror, which he shortened to ToRoHo (his celebrity nickname, of course), and I sometimes called him HoHo.

Hummm…have you ever thought about adding a turkey to the flock? 😉

We had 6 turkeys back in… I think 2007 or 2008. (Okay, a quick look at Flickr tells me it was 2009.) And this is what I discovered: God created chickens, and then He tilted his head to the side and considered. He said to Himself “I wonder if it’s possible to create a bird that is EVEN DUMBER than a chicken?” And lo, He discovered that it WAS possible. Those turkeys were flat-out the STUPIDEST creatures ever put on this planet. When they got big enough to get over the fence, they’d come up to the house, and I would look out the side door to see them on the side stoop, glaring in at me. I’d have to go out and herd them back to the back forty, and the PROCESS was ever so fun. It stunned me every single day, how stupid those turkeys were. Just plain dumb.

Here’s some video proof of what we had to do, multiple times a day (WARNING: Bad language. But MAN did those birds make me MAD) :

Those turkeys went to freezer camp the day after Thanksgiving that year because Fred looked out to see one of the males stomping up the driveway toward the road, trying to challenge the cars that were going by. I was concerned that someone would end up running a turkey over (and then sue us for pain and emotional suffering), so even though we were planning to wait another couple of months, we decided that it was their time. It took Fred so long to pluck those things (we have a plucker, so he wasn’t doing it by hand) that he swore we’d never have turkeys again. 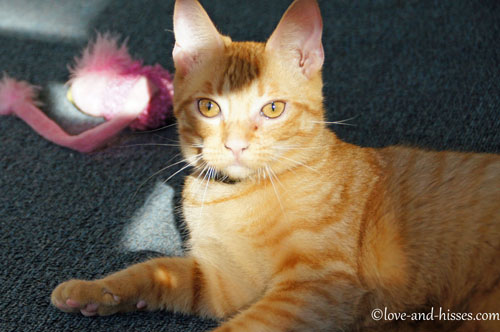 Sungold is such a pretty boy. 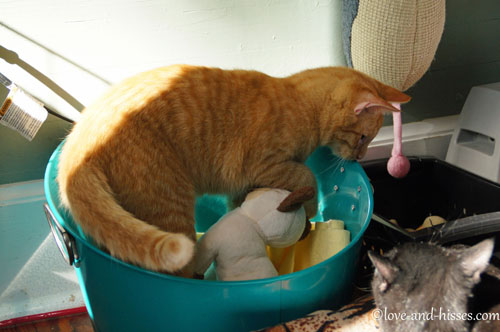 “We need more TOYS in here!” 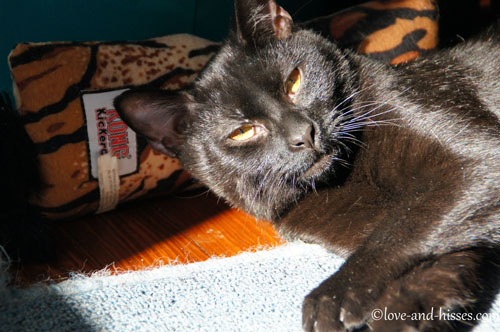 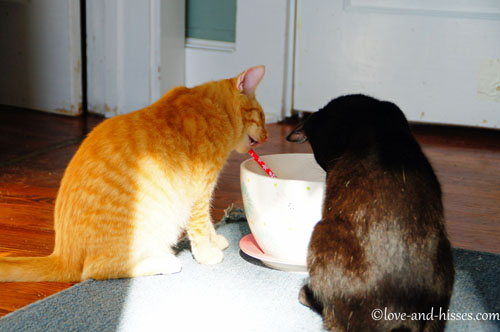 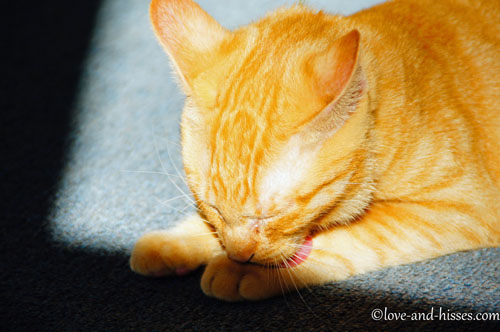 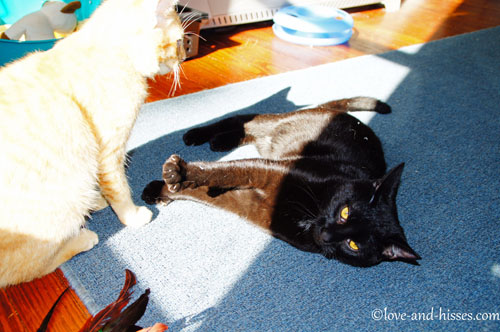 Note the defensive paw in place, just in case Stripey feels the need to pounce. 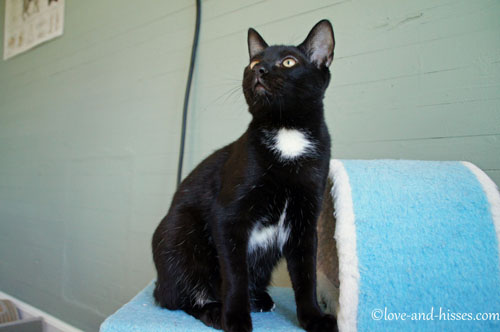 Dingwall Scotty shows off his white locket, bikini top, and you can see a glimpse of his bikini bottoms. 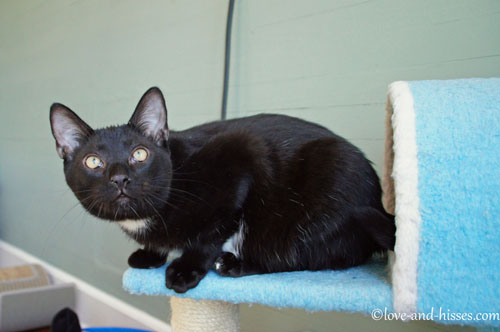 I love the white whiskers on his chin! 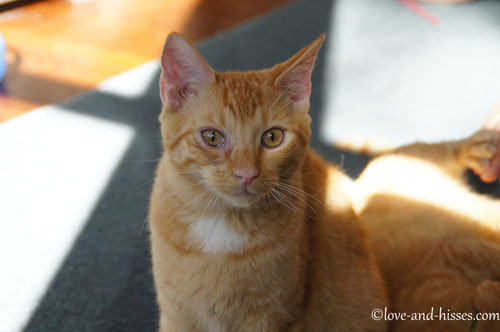 Stripey shows off his own white locket. 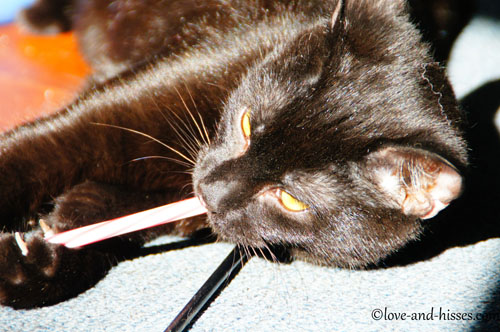 I got a pack of holiday straws at the dollar store. They’re a harder plastic than your usual straw, so I’m hoping they hold up a bit longer. So far, the cats seem to like them. 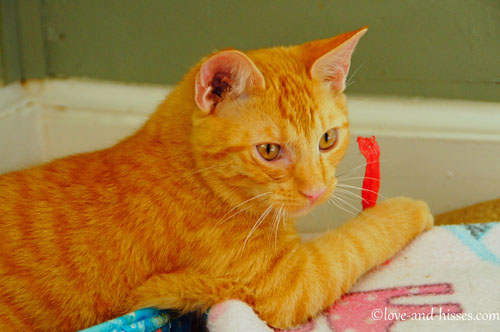 Stripey shows how the regular straws do NOT hold up against the mighty chewing of strong, sharp teeth. 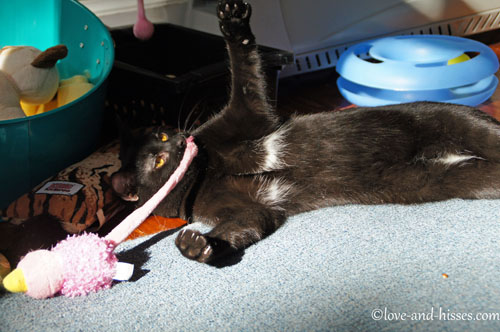 Kohle shows off his own white bikini. His is more of a string bikini, though. 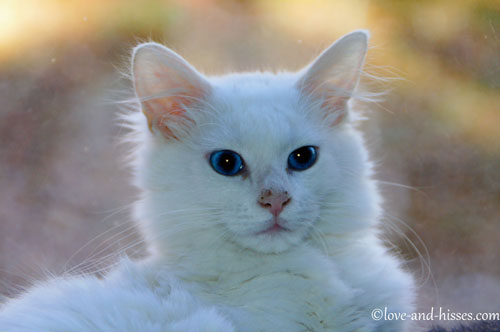 “Is my nose dirty again?!” Indeed it is, Dandiepants. If you weren’t always sticking it where it doesn’t belong… 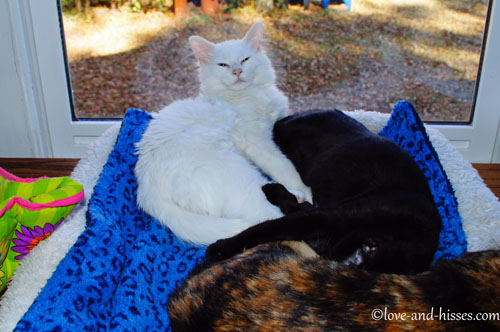 “I don’t appreciate that, lady.” 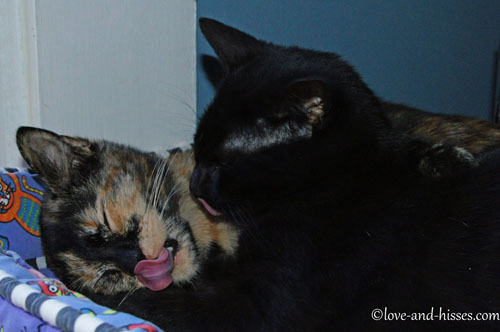 Bath time for Purslane and Thistle. 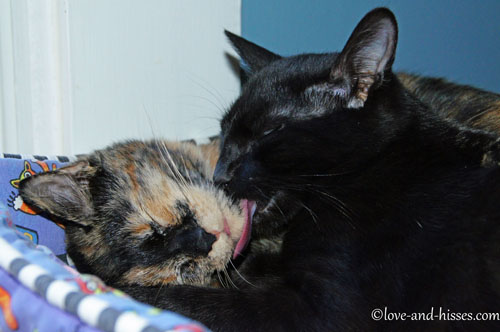 Check out the length of that tongue! 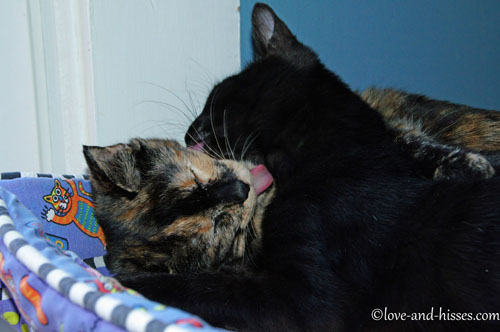 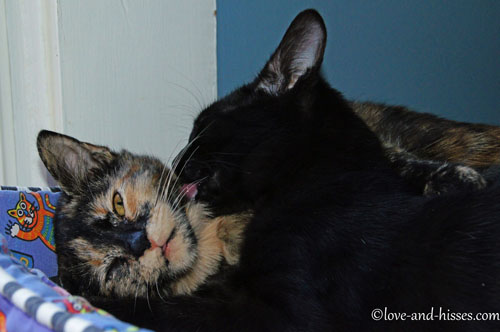 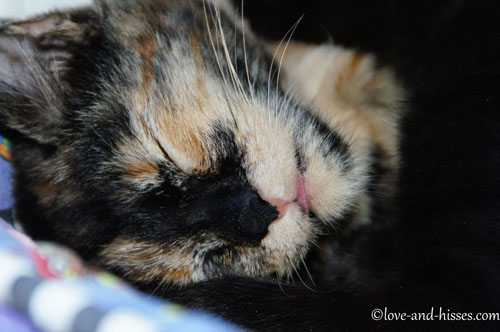 I love it when they fall asleep with their tongues sticking out. 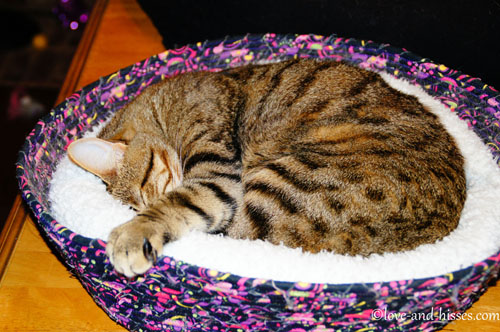 Corbie loves this basket so so so much.