Archie showed up in November 2014. He was skittish at first, but Fred worked his magic, and soon enough Archie was letting us pet him and pick him up. We intended to let him stay an outside cat, with plenty of warm shelters to hole up in, but Archie had other thoughts. After we spent a weekend trying to figure out how to stop him from climbing over the back yard fence and coming into the house, we gave up. He spends about 50% of his time inside, 25% on or around the side stoop, and the remaining 25% hanging out in the back yard.

I first wrote about Archie here.

We have no idea where he came from, but it seems pretty clear that he’d been in someone’s house at some point in the past because nothing about being inside worried or startled him. I’m pretty sure someone dumped him, possibly in the field across the street. He was young when he showed up – around 2 years old – and he will occasionally still play like a kitten. He’s a very quiet cat with Bratty Resting Face, but he’s a sweetheart and gets along well with all the other cats except for Stefan. He’s quiet, but if he needs to make his opinion known, he will. He’s got a very distinctive meow, low and husky, and the instant we hear it, we know who it is.

Despite always looking like he’s on the verge of snapping and mauling the nearest cat or human, he is gentle. He can be in the middle of a hiss-off with Stefan (he and Stefan hate each other), but if I reach down and pick him up, he goes limp. He’s never bitten or scratched either of us, he’s tolerant of the foster kittens who get in his face, and will only hiss at them to warn them off. If they persist in getting in his face, he’ll walk away rather than fight with them.

(I wish he’d walk away rather than fight with Stefan, but apparently that’s a bridge too far. A mancat has his limits!) Archie will occasionally accompany Fred into the back forty. George doesn’t mind having him there, and he ignores the chickens.

See more pictures of Archie over at Flickr or scroll through them below. 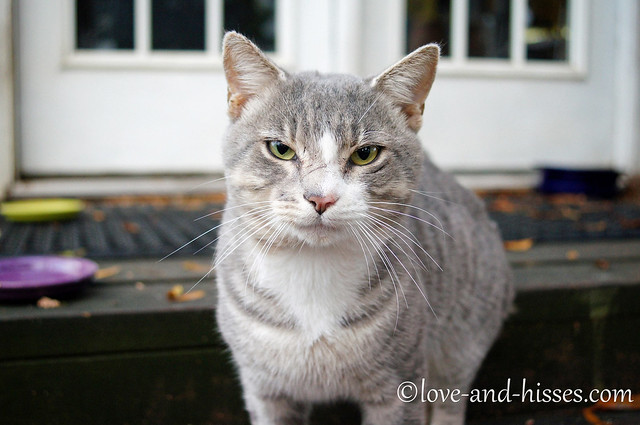