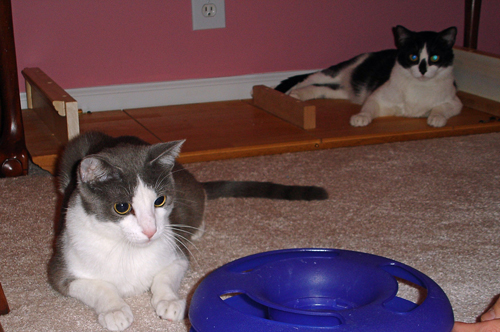 Moonman (gray and white tuxie, left) and his sister Moondance came to us in January 2007. They’d been at Petsmart for several weeks, in a cage together, and were getting on each others’ nerves. They needed a break, and since we had room for them, they came to us for a while. We pretty quickly nicknamed Moonman “Joe Bob” and Moondance “Myrtle” for reasons I no longer remember (they just seemed fitting names, I’m sure.)

They stayed in the foster room for a few days, and then were allowed to roam the house. Moonman/Joe Bob got along great with the permanent residents, and Moondance/Myrtle mostly did, unless they got too close or looked at her funny or just thought mean things about her, whereupon she’d unleash an unearthly wildcat scream that scared the crap out of everyone within earshot.

Moondance/Myrtle went back to Petsmart (and was adopted) sooner than her brother did, due to the aforementioned hellbeast scream that worked my nerves. She went to Petsmart on February 7th. Moonman/Joe Bob stayed another three weeks, and despite the many many MANY predictions that he’d become a permanent resident, that didn’t happen…

Except that he was adopted out and returned several months later. At the end of January 2008, we said goodbye to Spot, and Fred decided that we needed to adopt another cat (it being the best way to honor his memory). I wanted to wait a while and let our cats readjust to Spot being gone, but Fred couldn’t wait, and as mentioned at the bottom of my February 1, 2008 post, Joe Bob became a permanent resident.

The first post about them is here. There are links at the top and bottom of each entry; click on the one on the right to take you to the next entry.

You can see all the pictures taken of Moonman and Moondance here at Flickr, or scroll through them below. 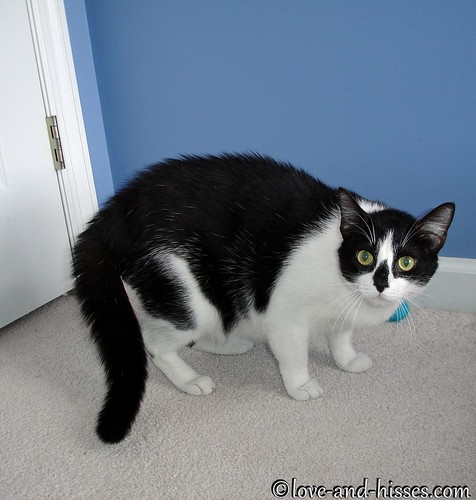