Dustin came to us on November 29, 2016 at about 8 months old. He was trapped with CC, Joss, and Sherbert (who have all been adopted), in an industrial park where they were likely dumped. Dustin is a bit of a scaredy cat, and Susan asked Fred if he’d work with him, since scaredy cats are his specialty.

Dustin was scared with humans, but very much a cat’s cat – he immediately loved our permanent residents on sight, and could be spotted napping alongside them on Fred’s bed every day. With time and effort on both our parts, Dustin decided that humans weren’t all bad, but he remained pretty skittish.

I’d describe him in more detail, but on December 26th we decided that rather than send him off to Petsmart, Dustin was meant to be a permanent resident. He gets along incredibly well with our permanent residents, is a super sweet boy, and we look forward to many more years with this beautiful boy. We have renamed him Dewey.

You can read about Dustin beginning here. There are links at the top and bottom of each entry; click on the one on the right to take you to the next entry.

You can see all the pictures taken of Dustin here at Flickr, or scroll through them below. 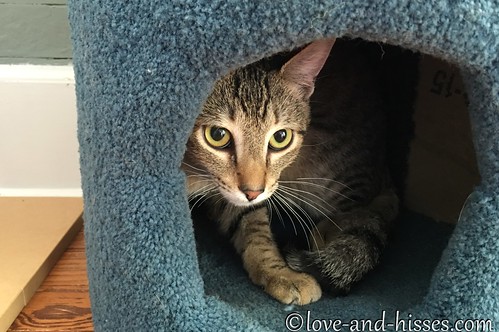